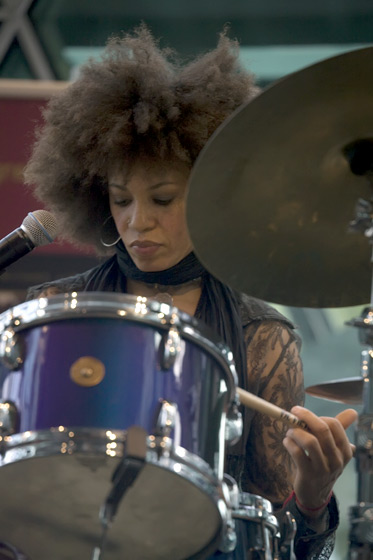 Mostly famous for her collaborations with jazz and soul artists such as Cassandra Wilson and Joss Stone, she also knows how to rock and roll, having worked with Lenny Kravitz for about fifteen years.

An encounter among different influences and musical cultures, her own albums are also praised by both critics and listeners.

A strong example for young female drummers too, Cindy Blackman is surely a prominent figure, one we should all talk about a bit more.

Today, let’s dive into the artistic life and the immaculate drumming style of this legendary musician.

From Ohio To New York

Born in a musical family, being the daughter and granddaughter of two classical musicians, the destiny of Cindy Blackman seemed to be clear since her childhood when she would spend her days hitting an “air drum” to several of her favorite songs.

Mostly influenced by Tony Williams, she finally convinces her parents to buy her a real drum kit at the age of 14, after moving to Connecticut and enrolling to the Hartt Music School in Hartford.

At this very young age, she already studies the way her jazz drummer idols manage to keep their four limbs independent, creating layer after layer and adding unheard color and texture to their playing. She will keep this lesson at heart while on tour with noisy rock’n’roll bands and in small New York jazz clubs alike.

Later on, Blackman moves to Boston, where she studies with the legendary jazz drummer Alan Dawson, at Berklee.

After this enriching educational experience, that left a huge mark on Cindy’s style despite being quite brief (she quit after only three semesters), she moves to New York and starts working as a street musician, accumulating hours of precious practice and finally breathing the Big Apple jazz scene in an unprecedented way.

In New York City, Blackman starts working at her own compositions too and she releases her debut album Arcane in 1988, under Muse Records.

For her big break, however, she’ll have to wait until 1993, when the opportunity to play with world-known rockstar Lenny Kravitz comes up. While enjoying life on tour, Cindy soon comes to terms with the fact she also needs her own creative endeavors to progress and keep her focus.

Therefore, she has kept working with other jazz musicians at her compositions throughout her whole career, releasing a bunch of critically-acclaimed albums, such as Music For The New Millennium (2005) and Another Lifetime (2010), dedicated to her mentor Tony Williams

Throughout the last decade, Blackman also became the regular touring drummer for Carlos Santana. The chemistry on stage soon began manifesting off-stage too: the two artists got married in 2010 and they keep collaborating at each other’s music.

Cindy Blackman considers herself a virtuoso. Her aim as a drummer is not to merely keep the tempo and add a few colorful fills. She uses the drums creatively, pushing the boundaries between genres, experimenting with sounds and rhythms. She doesn’t keep the tempo but, rather, she creates it, as Mike Zwerin pointed out.

Her jazz influences shaped her abilities at improvising and the freedom of her four limbs, able to create independent rhythmical layers that effortlessly mix into a central idea.

Her style is also influenced by her spirituality, as Blackman thinks music could be one of the highest means to transcend.

“I believe that music is so sacred that once you’re playing you are doing the work of prayer, whether you’re conscious of it or not because you have a focused intent”, she explained. “You transcend because you’re crossing barriers that a lot of people and even us as musicians don’t normally venture to.”

This belief surely explains her energetic and overflowing creativity, whether it is applied to drums, singing, or composing.

Blackman is a follower of the Persian Baha’i religion, which aims at unifying all the religions and all the people. Music, and the instinctive power of rhythm, in particular, can surely be a great way to work towards that goal.

Overall, Cindy Blackman proved herself a positive-thinker. In different interviews and articles reporting her statements, we can find her openness even towards criticism and prejudice, two aspects she had to deal with being one of the very few black women drummers in the history of jazz and rock. “Let’s face it, boys’ clubs still exist, she once said. “But I care nothing about that at all. I’m going to do what I’m going to do musically anyway. […] Any woman, or anyone facing race prejudice, weight prejudice, hair prejudice…if you let somebody stop you because of their opinions, then the only thing you’re doing is hurting yourself. I don’t want to give somebody that power over me.”

Cindy Blackman was a pioneer in many ways. She had to face difficulties due to her gender, race, afro hairdo, yet she managed to live a fulfilling artistic life that still inspires many younger musicians and draws the favor of jazz and rock lovers around the world.

Let’s all take inspiration from her tenancy and creativity, aiming every day at being better than the day before, studying and practicing hard, and just focusing on our passion: music.