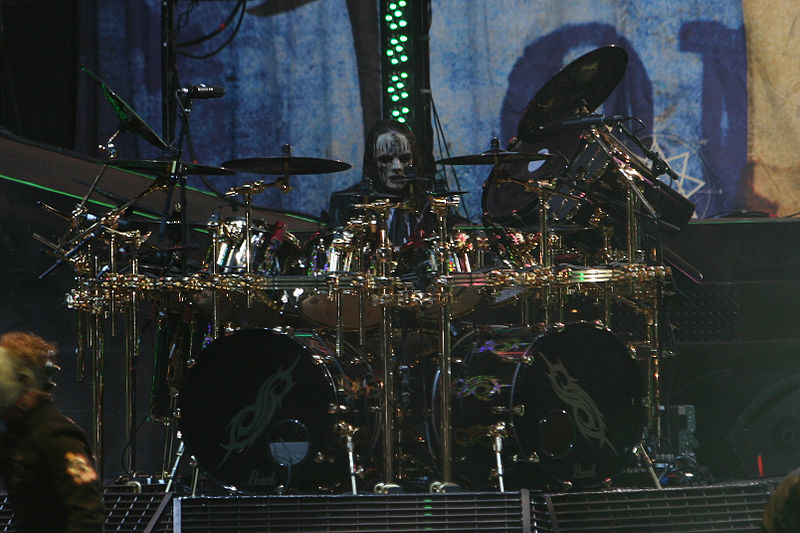 Joey Jordison is a man that wears many hats (or masks!) in music, but he’s most famous as a founding member and drummer of Slipknot.

As one of the original founders of the band in the mid-’90s, and song co-writer together with Corey Taylor, Joey became one of the most praised and reputable drummers of the younger generation. His signature fast and precise sound is easily remembered and the fact that Slipknot is one of the most successful metal bands of all times certainly shows that he knows what he’s doing when behind the drums.

Nathan Jonas Jordison was born in 1975 in Des Moines, Iowa, in the USA. He started playing drums when he was 5 years old, playing through the school.

He was always surrounded by music, as his parents played the radio to their kids, preferring that to kids watching TV. As a kid, Joey was influenced by Led Zeppelin’s John Bonham and The Who’s Keith Moon (and their frantic playing styles can certainly be heard in his music later on). Apart from drums, he also plays guitar since childhood, although he performed on guitar more rarely than on drums.

While in high school he was a member of a few local bands in his hometown, but he hadn’t had any serious success with any of them. In 1995, he was called by his friend Paul Grey, with who he played earlier, to join the newfound band, which was later to become the Slipknot.

After their first demo album, which was self-produced and recorded, the band didn’t hit it off immediately, as they didn’t get any label offers. So, in 1998. they recorded five–track record specifically for record labels, which brought them wanted attention and finally a deal with Roadrunners records and after that things were never the same.

Joey Jordison is an all-around musician, which he showed during his career. In the Slipknot, he was co-writer of songs, together with Corey Taylor.

The band consisted of nine members and is usually considered a part of the nu–metal scene, even though they don’t necessarily agree with that. Jordison, during his years with Slipknot, showed that he can play different music styles, from the trash metal beginnings to somewhat downplayed later recordings, while providing the all–needed punch to the sound of the band.

Besides his work as a drummer and songwriter in Slipknot, he worked in other bands, most famously in Murderdolls from 2001 to 2011, where he played guitar mainly, as well as drums and all other instruments that were needed. The band had some success, although not as much as Slipknot, and was disbanded in 2011.

After he left Slipknot in 2013 because of his health issues, he started a couple of projects, his latest called Sinsaenum. Apart from playing, during the years he worked on several projects as a producer, with some success, helping less known bands to record their debut albums and working with likes of Marylin Manson on some of their mixes.

Also, during all of his career, he was known to help other bands on tour, hopping on and playing for several gigs if for any reason their drummer wasn’t able to play. Most notably, he played Metallica concert in 2004, after Lars Ulrich had to go to the hospital, so Joey, who was present on the same festival jumped in literally in the last minute, together with Dave Lombardo and Ulrich’s drum technician and played most of the songs on that concert.

Joey is most known for his fast and precise playing style (particularly with regard to double kick drumming), which earned him recognition and praise around the world through the years. Even though he spent his whole career in metal music, his background is not metal, but more jazz and rock music, which can be heard on his tracks. Because he isn’t just playing metal riffs, but also including other sounds, he can bring a difference to his sound.

Secondly, he is well known for using technical accents and patterns in just the right amount and time. He isn’t playing fast technical parts just because he can, but he carefully mixes them together with his bandmates playing, thus creating a unique sound.

Also, he is crucial for creating that frantic sound that Slipknot is famous for. If it weren’t for his creative use of drums, and sudden changes in rhythm and tempo in contrast to guitars and other instruments, the band wouldn’t be able to pull off its recognizable sound.  That, together with his funky drumming patterns and clever use of syncopation is what made Slipknot and Joey stand out from the others.

Jordison is known for using big drum sets with lots of drums and cymbals and using of different makers. Being one of the most respected and famous drummers in the world, he is of course endorsed by many companies. His drums are made by Pearl, which is a company he hasn’t changed since they were the first to endorse him when the Slipknot started to play. He uses the Pearl Export EX kit, which company created especially for him, as well as TAMA Iron Cobra bass pedal, Paiste cymbals, and drums electronic triggers.

Apart from using classic acoustic drums and cymbals of all size and shape, Jordison is famous for use of electronic triggers and electronic drums, which give him even more options and functions when he plays. With all of that, he is able to play anything he wishes and has a level off ability needed to cope with a set as huge as this.

Joey Jordison represents a frontrunner of the middle generation of drummers in general and especially in the metal genre. Rising at the end of the ‘90s, he and his generation replaced the old guard that brought metal to the world and made it famous and mainstream in the likes of Metallica, Slayer, Megadeath, etc. Even though they have reputable careers now spanning for 30 years, they still have a lot to bring and it’s expected of them to keep making great music.

Even though Jordison has some health issues, which were the main reason he left Slipknot in 2013, as he had a disease that eventually led to him losing all sensation in his left leg, he managed to recover and keep on playing, with medication and practice. He will most definitely keep producing music that made him famous and in which he is considered a master of.

Metal drummers can sometimes be overlooked by other drummers as players that just need speed and power for play and no technical abilities whatsoever. But, Jordison put such critics to bed with this differential playing style, which, apart from technical speed and precision that is almost unmatched today, brought many different playing styles and creative use of different playing tricks.

We hope that we will hear more new songs from him in upcoming years, be it as a drummer, guitarist, songwriter or producer. If you’re a younger drummer, there are certainly many things you can learn from this gentleman. And of course, it is sure that all of them will bring something new and quality to the table, setting the bar higher for himself and all of the others. But, that’s what he has done throughout his career and there is no sign of him slowing down or giving up.