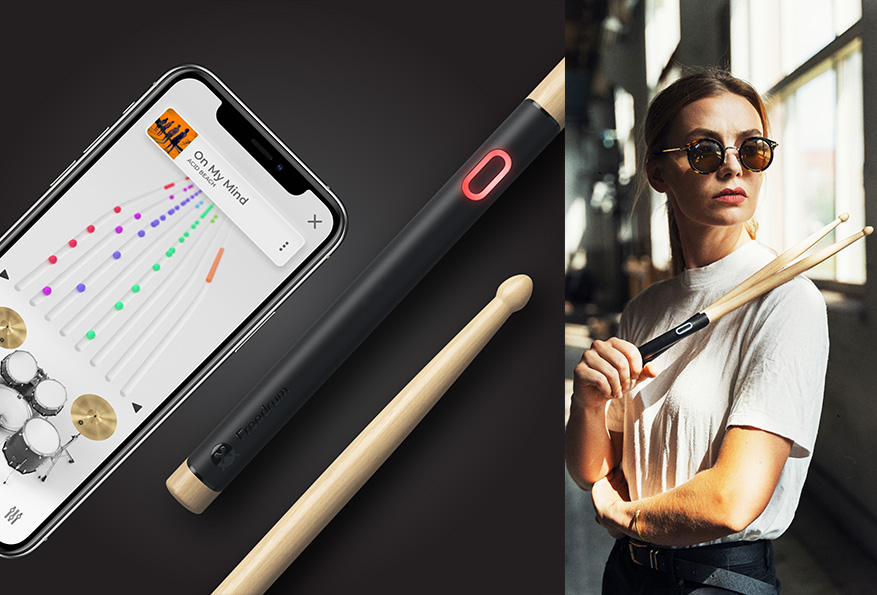 Freedrum 2 is set to come with an updated design, redesigned hardware and software architecture, and some new features such as learning software and recording via their app. There are currently two types of pricing:

If you’re interested in checking out Freedrum sooner, then be sure to check out our Freedrum 1 review, as this is still a great product to consider.

Freedrum 2 is set to build on the current version of Freedrum, while offering more features.

The Freedrum sensors will be integrated into the drumsticks to improve the weight distribution to make it feel more like you’re playing just a pair of regular sticks. Also, it would probably make it much less likely that the sensors would rotate around the sticks and lose context of where you were playing.

A redesigned architecture for the hardware and software to improve the way that the drumstick movements are captured.

A big feature is set to be the addition of learning software, which can help you play songs in real-time which shows the notation, and can capture the accuracy of your playing.

The software would also allow you to record and share your playing on social media.

The app is also set to allow you to add goals track progress, and that the app would also add recommendations of other songs to try to play.

Haptic feedback features will be included, which means that the drumsticks would vibrate relative to the style of drum or cymbal that you’re playing. in the Kickstarter video for this, the drummer that plays the floor tom says that he gets more vibration from that compared to the snare, or hi-hat, which is what you would expect from an actual drum set.

Heel-up playing for your feet

A very welcome addition to Freedrum 2 will be the addition of, heel-up playing for the hi-hat and bass drum. This is a feature that looks like it was requested quite a lot, particularly probably for double bass drum players. So, this should be a good addition.

It will also allow you to choose your grip style.

This will also make it more useful for a wider amount of drummers.

As of the 10th of September 2020 at the time of writing, Freedrum two is currently in the crowdfunding stage. Go to the Freedrum website here to get more information about it so you can back the project and get early access to it when it’s due to be released later next year.