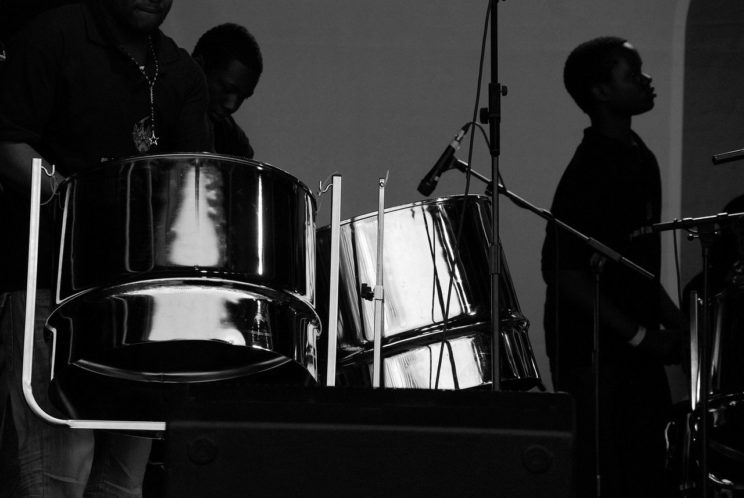 With their fascinating sound, resulting in ethereal and exotic vibes at the same time, steel drums (steelpans) have gained more and more popularity in different genres and styles of music throughout the last few decades.

Also known as steel pans, these instruments were once built from industrial containers. Nowadays, manufacturers usually employ some high-quality steel to build them.

Steel drums are played both by soloists and small ensembles, as they can come in a variety of ranges, tones, and timbres.

In this small guide, we will cover a few fundamentals on their functioning, history, and use.

Let’s start from a clarifying point: the term “drums” merely refers to the industrial containers traditionally used to build this instrument which, however, is not part of the membranophone family. Steel drums actually belong to the idiophone family, a group of instruments that produces sounds simply by vibrating, and without needing air, strings, or membranes.

For this reason, it is more correct to call these instruments steelpans, although steel drums is a terminology widely used.

How to play steel drums

Pannists, the musicians who can play the steel pan, strike their instrument with either two or four sticks tipped with rubber. By hitting the pan in specific areas, they produce specific pitches.

Performers could also employ more than one steel pan, to have a wider range of notes available, as we will briefly explain in the next paragraph.

The notes of a steel drum

There are several different kinds of steel drums available on the market, able to perform specific ranges of notes. Overall, pannists with a complete kit can rely on an impressive range that goes from F1 to G6.

Steel pans are usually classified according to their playing range.

The highest-pitched category is the soprano or high tenor pan that can hit notes between D4 and F#6. On this pan, notes are arranged in the cycle of fourths, clockwise. The low tenor pan has the same noting configuration, but it has a lower playing range that spans from C4 to E6.

As highlighted in the previous paragraph, steel drums can also be used in combinations.

That’s the case of the double tenor set, made of two different pans, ranging, as a duo, from F3 to B5. The double second pan, on the other hand, can stretch between F#3 and C#6, offering also more notes to allow chromatism.

The Guitar pan is another two-pan combination, often used for harmonic support rather than solo playing. It has a range that goes from C#3 to F#5.

Three-pans combinations are not as popular, but they include the so-called Cello pan setting, where each pan includes the four notes of a diminished seventh chord, in a range that spans from C3 to B4.

There are also four-pans combinations, such as the one called Quadrophonic steel pan, that allows the musician to play any note between B2 and Bb5, or the Four Pan Bass, featuring notes between G2 and D4.

How to tune a steel pan

Tuning steel pans requires a lot of skill as the process involves not just the calibration of pitches, but also the adjustment of timbre. It is essential to have a good ear for harmonics.

Generally, when the instrument is built, the tuning process involves three different steps.

First of all, the metal gets softened until we have the correct pitches. Then, there is a fine-tuning step undertaken in the regular playing position. Finally, there is a final tuning step happening after the surface is completed.

Players can also tune their instruments using hammers or tuning sticks and softly hitting the pan until they achieve the desired sound.

Where did steel drums originate?

Steel drums are the national instruments of Trinidad and Tobago, where they originated and developed throughout the XIX and XX centuries.

During the French domination, African slaves working in Caribbean plants created a sort of parallel carnival festival (as they were not allowed to join the Europeans in the celebration of the carnivale) and called it canboulay.

For these celebrations, they would use a primitive version of the steel pans we know today, playing music that contained various influences, from their African origins to the local tradition.

When slaves were forbidden to play music, they secretly kept building percussive instruments out of pans and other everyday objects, creating what would later become the modern steel drums.

Throughout the XX century, the presence of American soldiers in the Caribbeans allowed the Western world to receive this new musical influence. In a little time, steel drums became popular and started being featured in different songs and hits.

Steel pan is hugely present in both contemporary and traditional Caribbean music, but it is sometimes employed in some Western hits too.

While many artists and bands either sampled the sound of steel pans or used a synth to obtain it, there are a few popular songs that feature the real instrument, the most popular example probably being Beach Boys’ Kokomo. In this exciting tune, rich of exotic-filled vibes, the steel drums are a constant presence, since its hypnotic introduction.

In 1967, the British band The Hollies recruited a pannist busking in the streets to record their hit Carrie Anne, providing another example of how the Caribbean instrument could be employed in pop and soft rock music.

For another real steel pan driven song, check out Jimmy Buffett’s Margaritaville, recorded in 1976 and published one year later.
Lastly, in 1988, Jane’s Addiction also employed steel drums in their single Jane Says, take from their album Nothing’s Shocking. The instrument is present in various sections of the song, especially during breaks and fills.

There are way more songs featuring steel drums, even in our current charts, although they often use sampled versions of steel drums, such as this one by Rudimental.

Steel pans are fascinating. They are also great aids to develop aural skills since their tuning and playing processes are far from being ready-made and easy.

They can give an exotic touch to your repertoire or even calm your nerves with their relaxing tone.

Whatever the use you make of them, you will surely find this percussive instruments exciting and challenging!