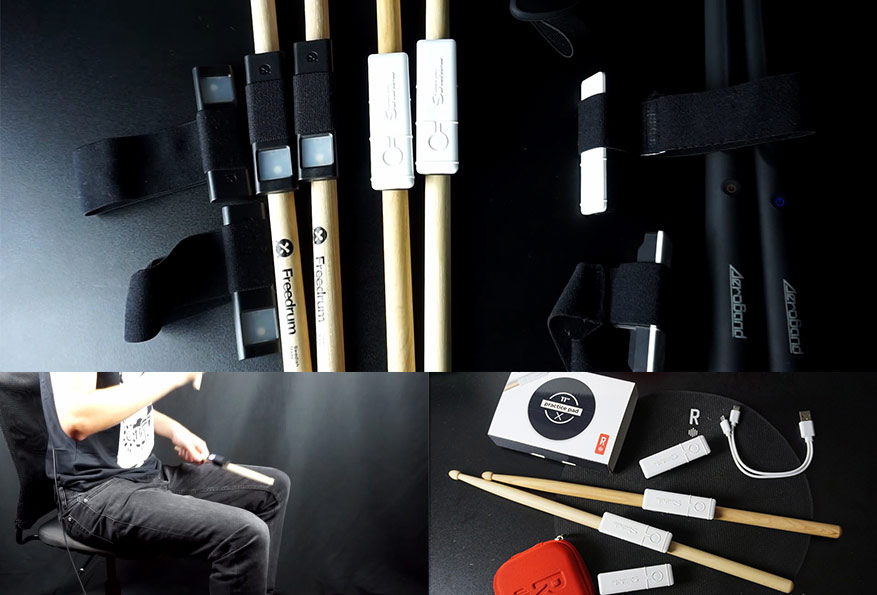 Freedrum, Senstroke, and Aeroband PocketDrum look very similar but each of them has their own playing style and quirks. I have had the pleasure of trying out each of these products and can give you a good comparison between the three of them.

I’ve had a lot of fun playing around with these products, but they are not perfect. Each of them has some issues and quirks, which I will discuss throughout the article.

I’ve received each of these products from their respective companies for free in order to review them, but I’m going to honestly compare them in this review.

To see each of these in action, check out our comparison video:

I found Freedrum to be quite fun to play, portable, and easy to use. Their sensors also work very well for playing with your feet.

Aeroband Pocketdrum is somewhat similar to Freedrum, but seems to be aiming for a wider audience. The app is a lot more gamified, and the sticks have lights and vibrations when playing.

Senstroke has good sensitivity when detecting drumstick hits, and has an ‘improve’ mode on their app which is a nice feature.

1. Freedrum (Complete Package)
The complete package includes all 4 sensors and everything needed to get started.
View Price

2. Senstroke (Ultimate box)
The Ultimate box includes everything you need to get started
View Price

Which one you go for is very much a matter or a preference, so make sure to keep reading!

These are all rechargeable devices that come with charging cables.

They all connect to your Phone via Bluetooth. You can download the relevant dedicated app for iOS or Android.

If you’re more experienced in making music, you can also connect these to a DAW on your phone such as Garageband iOS or computer via MIDI over Bluetooth (more on that later in the article!).

Sensitivity of the Stick Sensors

The sensitivity of stick sensors varies quite a bit across each of these products.

The sensitivity is pretty good for both of these, as long as you play it within the correct range of motion.

It picks them up better than I expected, but the dynamics are not great. For example, if you are doing a fast roll, one stroke can be unrealistically louder than the other.

Fast fills between drums often don’t always come out very well. It does the job relatively well, but I think there may be technology limitation in the way that each of these products perform their motion tracking.

Aeroband also has lights and tactile vibrations as you play. They’re pretty cool, though they don’t really feel like real drums!

The sensitivity of the senstroke drumsticks are certainly more accurate for fast movements between the drums, but it can be tricky to set up your practice space in exactly the right position (so as to not trigger the wrong drums/cymbals). However, like all 3 products in this article, Senstroke does come with its ‘angle drift’ issues which I’ll talk about later on.

Sensitivity of the Foot Pedals

At a minimum, each of these trigger hi-hat and bass drum sounds.

I personally like the foot sensors of free drum the most both because of sensitivity, as well as the option to switch between bass drum and hi-hat by changing the angle of your foot. This is pretty similar to how you do it on a real drum kit.

For Senstroke, you need to individually choose if you want one of your feet to be used for either hi-hat or a double pedal.

Aeroband currently does not give you the option for a double pedal.

You need to play in much more deliberate angles for each of these products. You really need to tighten the grip up to stop the sensors from going all over the place.

The vertical angle of playing toms and cymbals also feels a lot more deliberate compared to a real drum set. In order to accurately play the toms and cymbals on Aerodrums or Freedrum, you really have to rise you hands up quite unrealistically high.

All that aside… once you get used to it, these are all quite fun to play!

All of these apps work off the same premise, you enable Bluetooth and connect your drumstick and foot sensors in the app.

Freedrum has a simple app that’s easy to use and very useful for drummers that want to start virtual drumming very quickly without getting involved with ‘guitar hero’ style games.

The drawback to this is that there are not a massive amount of extra or fun features on this app. The drum samples are quite good, but I certainly would like there to be more options, and I was surprised they were not included.

I guess that if you really want to have extra sounds then you can just connect this up with GarageBand. However, I think that they could at least have a few extra sounds and kits so that people could quickly get up and running with this.

The guys at Aeroband clearly put a tonne of effort into this app, although the drum sounds are not very good.

It’s probably the easiest app to use out of this list because it includes instructional videos, and notifications that remind you to recalibrate your sticks at the right time. So, they get you on the right path and help you learn how to use the sticks very well. It contains a ‘guitar hero’ or ‘rockband’ style game that works quite well.

In my video review, I had a criticism with this app because you have to go to a lot of different levels in order to ‘unlock’ the free mode of playing. Many drummers will likely just want to get to the free mode straight away instead of engaging in the more gamified type games. However, I recently got a message from a Aeroband to say that they have changed this and that free mode is unlocked early on in the app.

Overall, I was quite impressed with this app. However, one drawback is that you cannot configure the location of drums/cymbals on the kit and therefore, I think it would not work for left-handed drumming.

This app is somewhere in between the Freedrum and Aeroband app. It includes both freestyle drumming and a ‘guitar hero’ style game.

It’s certainly usable, but I did not find it to be a great experience.

I assume that the iOS apps are similar to these, But I cannot be sure about that.

These generally work a lot better when using wired headphones or using the speakers on your phone, because the sensors use Bluetooth, adding Bluetooth headphones might be very laggy. I’m not sure if there are any solutions in the works for this.

An alternative option is to use 2.4 ghz wireless headphones. Though it might not be within the budget of many people to get these.

In my opinion, the main issues across all 3 products are ‘angle drift’ issues, which may be relative technology limitations with the technique of motion tracking that they use.

This is where the sensors lose context of where they are. When this happens then it could start triggering the wrong drum or cymbal at any time.

The orientation of the sensors sometimes drifts while you’re playing with both of these products. In this case, the senors will start detecting the wrong drum and cymbals being played. What you have to do in this case is to post your sticks forward and press the buttons briefly to reorient your drum kit.

You will find that for every one of these products you need to press the buttons on each stick relatively frequently to realign the sensors in the correct direction.

After playing any of these products, then this starts to become second nature to you. Aeroband quite smartly adds a reminder on their app when you’re starting any game to tell you to recalibrate your sensors before starting.

You need to get very used to the correct motion of drumming with these in order to not completely throw-off the sensors.

Overall, you can minimize the amount of angle drift when you get familiar with playing these, but in my experience, you’re still going to have to get used to pressing those two buttons fairly often.

As mentioned earlier, you can also connect these devices via MIDI over bluetooth.

Though Bluetooth over MIDI might not be universally supported by all DAWs right now, I’ll talk a bit more about that later, in the case of Windows, you might need some workarounds to get the MIDI connection working correctly.

You can use a DAW on your phone such as Garageband iOS and play a virtual drum rack from there.

You can also connect to a computer via MIDI over Bluetooth.
This would likely work better on Mac than Windows. In some cases such as in Windows, you might need to download extra MIDI routing software for it to work, if MIDI over bluetooth isn’t supported on your DAW, it might not always work the way you intend.

I’m using Windows 10 and this did not work out-of-the-box for me in Ableton Live. I eventually got of one of the sticks connected when using some other software, but perhaps some better workarounds exist.

One of the guys from Freedrum also has a video showing it working with the Reaper DAW on Windows 10, so you could also check that out.

Note, this section is a comparison between Freedrum and Senstroke (the Aeroband app does not currently allow you to customize your drum kit items or placements).

It’s probably a little easier to configure and add more elements onto your drum kit when you’re using Freedrum solely because you do not have to have separate playing surfaces, and the app is a bit easier to use.

However, I found that with both of these products, it’s best if you keep the number of drums and cymbals to a minimum. Because if you add lots, you can easily trigger the wrong elements, and it can become pretty annoying to play.

Though when you get used to how they work and get used to the movements required to play these, then you can slowly increase the amount. For starters, I do suggest that you just keep the low amount of drums and cymbals and just keep the default kit configurations.

After playing around with both options, I found that it’s easier to get up and running quickly with playing Freedrum and Aeroband (in comparison to Senstroke).

You can play it in the middle of a park bench, at the office, at home on your couch, basically anywhere you want!

With Senstroke, you’re going to need to have a playing surface and set it up, and calibrate your sensors to make sure it’s right

I had a lot of fun playing around with all of these products.

If you’re thinking of getting one of these and you want actually airdrum, then either pick Freedrum or Aeroband pocketdrum.

The complete package includes all 4 sensors and everything needed to get started.
View Latest Price

Freedrum is more suited to more freestyle drumming. The app is simpler although it’s very well designed. Whereas, Aeroband is more gamified product with lights and tactile feedback.

Senstroke is quite different entirely. The sensors are nicely sensitive, particularly for fast fills and rolls, if you’re happy enough to set up a practice space, then these are also a good option. I found the app a little bit clunky to use but it is usable.

I personally reach for the air-drumming products a bit more because they are a lot more convenient to play, but it’s all down to personal preferences.

I really hope this has been a useful comparison between Freedrum, Senstroke, and Aeroband Pocketdrum. I also have separate reviews of each of these products (Links: ) if you want to learn more about each.