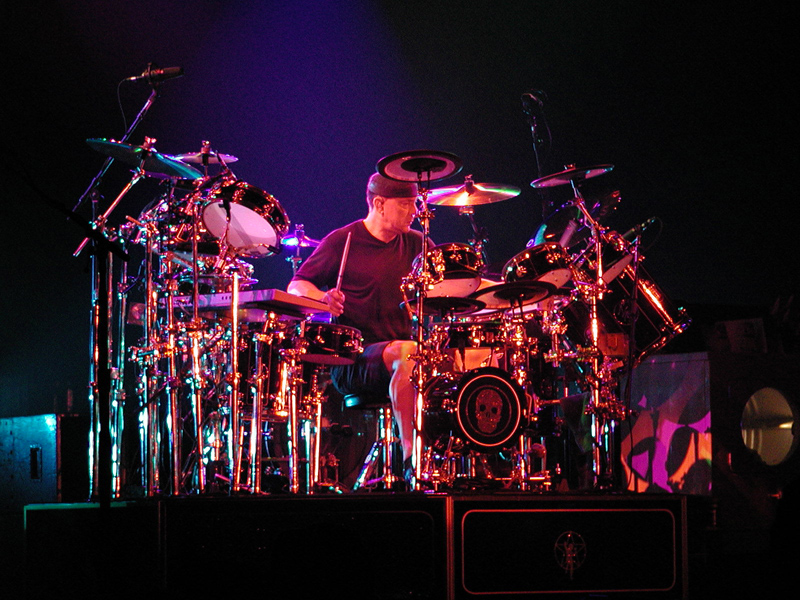 For most drummers and other rock musicians, there is probably no need for special introduction, as Neil Peart is one of the most famous names in the history of rock drums. For those who are still unfamiliar with this huge name, we are talking about a drummer that was a part of the Canadian most famous rock band – Rush. Neil Peart is the youngest drummer ever to be introduced into the Modern Drummer Hall of Fame. That happened in 1983 when he was only 31 years old.

Bands and Side Projects

Although mainly known for his work in Rush, Neil Peart participated in numerous other projects, including numerous studio recordings, instructional DVDs, etc. Still, let’s start from the beginning.

Inspired by “The Gene Krupa Story”, Neil started to play drums at the age of 12. Despite the relatively late start, it quickly became obvious that music will be the main preoccupation in his life. Just a couple of years later, he started to play with a couple of local bands. However, living in a small town in Canada quickly became a big encumbrance to his career. Eventually, he dropped out of high school at the age of 18 and moved to England, in order to become a professional musician.

His England adventure wasn’t quite successful, so he decided to come back to Canada 18 months later. He joined a local Ontario band called Hush and played in bars and other small venues. Soon after, he was invited for the audition for Rush, which was already a relatively known band in Canada. He officially joined the band in 1974, just a couple of weeks before their first U.S. tour.

Besides impressive drum skills, another thing that characterize this extraordinary musician is a great talent for songwriting. Before Peart came to the band, other members were mostly interested in jamming. Obviously, great lyrics finally enabled Rush to make a commercial breakthrough and become more mainstream.

At the time Peart joined the band, Rush was largely a blues/rock band, despite some great musicians played in the band. As he was getting more involved into songwriting and composing, the band was moving to a pretty progressive sound. The following years were the most successful for the Canadian band.

Such style change allowed Peart to show all of his potentials. Logically, invites to participate in various side projects were coming. One of the first side projects was with the famous jazz/fusion bass player Jeff Berlin. Peart participated in “Champion”, which was released in 1985.

Another interesting side project started in 1994 when Peart was invited by Buddy Rich’s daughter to play in the Buddy Rich Memorial Scholarship Concert. Soon after, he decided to produce two tribute albums to the legendary drummer – Burning for Buddy Volume 1 and 2.

One of the main reasons why Neil Peart is a legend is his dedication to drums. Initially a rock drummer, he never stopped working on himself, on improving his skills. As Rush’s music was becoming more progressive, his playing style was changing. Considering that he was participating in various projects of different music genres, we could probably agree that versatility is the word that describes him best. Blues/rock was his original preoccupation but soon enough, he was becoming a progressive rock and jazz/fusion drummer.

Still, that’s not all. When he was in his prime, he decided to start learning more traditional jazz forms of playing, to learn playing styles of his idols. He started all over again, from the most basic things, which clearly shows his amazing commitment to drums and music in general.

If you look at all the genres that Peart played, it doesn’t sound strange at all that his influences were coming from many sides. Of course, it all started with classic rock legends like John Bonham, Pete Thomas, Ginger Baker, and others. Also, he was heavily influenced by jazz drummers like Billy Cobham, Buddy Rich, Gene Krupa and many others. These are just a few of many big names that influenced Peart’s playing style.

Just a quick look at the evolution of Rush’s music and it’s not hard to realize that Peart’s music changed a during his career. For all those years, he was a very disciplined musician, who worked on his playing permanently. Initially, he was pretty much a typical rock drummer, but his playing style has always been pretty flamboyant. That “busy” playing allowed hit to develop a great technique, which was of huge help in his development as a musician.

As Rush was getting more progressive, his playing was becoming more complex. Besides already established fast-playing style, he also started with odd times, time signature changes and similar things. In order to sound more progressive, he also started to add various kinds of percussions to his drumset, things like a gong, triangles, chimes, cowbells, timpani and many more.

In the 80s, the band’s sound was under a heavy influence of electronics and that particularly had a huge impact on Peart’s playing. Once energic and busy playing now become far more refined. Along with more precise playing, he also started to incorporate all kinds of unusual rhythms, mainly because of the heavy use of syncopation.

At the time, that was something really refreshing, especially in rock music. These days, his playing is some of the most studied in rock drumming, mainly because of great precision and amazing versatility, which are the things that made him a true legend.

Every drummer has his own preferences when it comes to equipment. Many of them have heavily customized sets but not many of them can compete with Peart. Through all these years of playing, he always used pretty complex sets. Not only that he always played on drums that have more parts than a typical drumset, but he also incorporated various other kinds of percussions. Many of them were pretty exotic for the time, like a gong, timbales, timpani, temple blocks, bell tree, tubular bells, wind chimes, crotales etc.

His set was becoming bigger and bigger. Eventually, he replaced some of this percussions with MIDI trigger pads. One of the most interesting pieces he incorporated in the ’80s was a kind of two-octave electronic MIDI device (Malletkat Express), which can practically resemble xylophone and similar instruments.

Peart’s biggest trademark is probably his famous 360-degree drum set, which he used during Rush tours. Practically, there was a huge acoustic drum set in front, while an electronic drum set was in the back. Such combination wasn’t just highly beneficial in terms of playing, but also had a huge visual effect on the crowd, so his solo performances on Rush’s live shows were real attractions.

Meanwhile, Peart was switching more and more to electronic drums. He is best known for the incorporation of Roland V-Drums, as well as for the use of various kinds of samples. He practically sampled all sounds from his exotic acoustic percussions.

However, acoustic drumsets have always remained the core of his playing. For all these years, he played on various models from different brands, like Tama, Ludwig, and DW. He is currently on DW drums, on a quite customized set. You can get some of his signature models, such as DW R40 snare, but keep in mind that these signature models are quite expensive.

2 thoughts on “Neil Peart – The Legendary Drummer from Rush”