Drumsticks come in many different sizes and shapes. A quality set of drumsticks is one of your most important assets as a drummer. This list rounds-up the 7 best sticks to suit any type of drummer.

Junk drumsticks can be unbalanced, made from poor materials, and break easily. They can also be inconsistent across even the same models, which means that you may not get the same playability from different pairs.

About this Guide
This list covers the best drumsticks for both acoustic and electronic drums. Were going to start by recommending some of the best all-round drumsticks. After that, we’ll go in-depth to help you understand what different drum stick sizes mean and what might work best for you.

The 7 Best Drumsticks – Our Pick

2. Vic Firth American Classic Extreme 5AN (Nylon tip)
Great for Electronic Drums - Similar to the 5As above, but slightly bigger. The nylon tip makes them better for electronic drums (they will not splinter and damage the heads)
Check Price 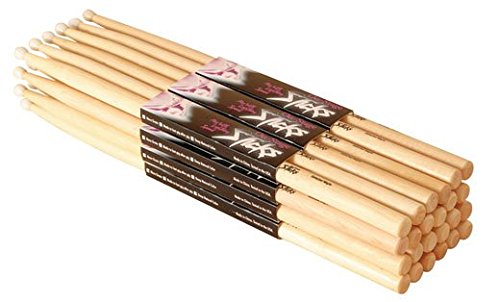 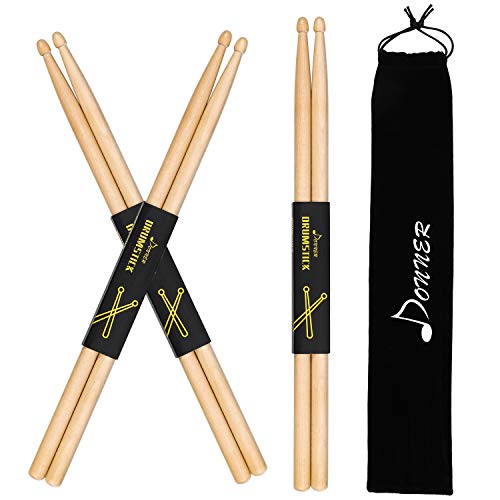 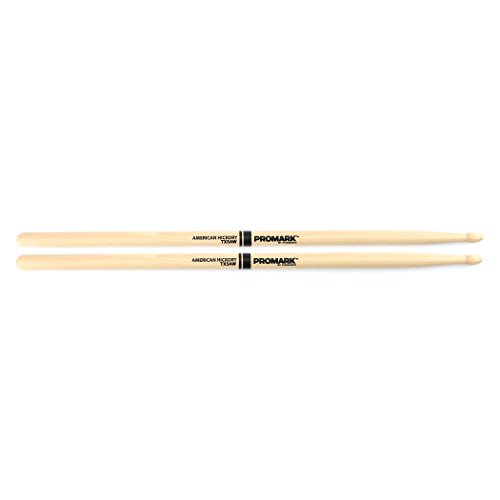 This is probably the most well recognized drumstick in the world. The Vic Firth 5A American classic strikes a great balance between, weight, length, wood type and size. I recommend this as the best drumstick for beginners, but it’s also very suitable for all levels of drummers.

I believe almost every drummer should have at least one set of these in their stick bag.

Compared to budget sticks, the 5A American classics tend to be a lot more balanced and have much more durability.

These sticks are made from hickory wood, which is a great middle-ground wood type. It is very strong without being too heavy.

If you’re a very heavy hitter, you should consider a drumstick made from Oak instead.

Check out this great video below to see the production and quality control checks that go into a Vic Firth drumstick:

One of the most renowned producers of drumsticks, Vic Firth created the Classic Extreme 5AN type with nylon tips.

As mentioned previously, the Vic Firth 5A has become a very popular choice for drummers. The Extreme 5A sticks are a bit longer, and add a bit of extra reach to your playing.

These sticks are made of hickory, so their density mixed with a pinch of flex provide an articulated sound, appropriate for different drumming styles. Hickory is a well-known shock absorber, so they have a healing effect on drummer’s hands.

3. Ahead Classic Series Drumsticks – 5B

The Ahead Classic series is made using an aluminium core and plastic coating. Ahead claim that these drumsticks last between 6 to 10 times longer than wooden drumsticks.

Ahead drumsticks are popular and useful for metal drummers. This has likely been helped with endorsements by world-famous names metal drumming such as Joey Jordison (ex-Slipknot) and Lars Ulrich, who each have their own signature models of ahead drumsticks.

The material of this drumstick allows for additional rebound, which can help for very fast drumming (such as speed metal).

If you’re a heavy hitter that finds your wooden drumsticks often breaking, then it might be worth checking out the Ahead Classic series.

Although we’re big advocates of ‘quality over quantity’ when it comes to drumsticks. However, there are many drummers that simply like to just have a large quantity of drumsticks on hand, and aren’t particularly concerned with the extra balance and feel of more expensive sticks.

If you’re in that school of thought, or need to buy a set of drumsticks for a large group of drummers, then these on-stage drumsticks might be a good option for you.

These Donner Drumsticks are made of hickory wood material and are of decent quality.

They don’t stand up in terms of balance and feel as the Vic Firths or Pro Mark Hickory drumsticks. However, they are usually considerably cheaper.

The Promark American Hickory Classic 5A drumsticks, as well as the Vater 5A hickory drumsticks, are both great quality sets of sticks.

They are both quite similar to the Vic Firth Hickory Classic. The differences between these sets of sticks are very subjective. Drummers are often quite divided about which model breaks or wears out more easily. They also tend to disagree about which stick feels better.

The only way to try is to compare them for yourself and make the decision on which model of drumstick you prefer!

Though if you’re looking for a quality set of sticks. You can’t go wrong with any of these!

Before we get into the details, you should check out this great video by Jared Falk from Drumeo, which gives a great overview of how to choose between them:

In a nutshell, there are four main types of drumsticks that I recommend rookie drummers should choose from: 5A, 5B, 7A, and 2B.

As you’ve noticed, each of these types contains a letter and a number in its name.

The number in the type of a drumstick represents its thickness. The lower the number, the thicker the drum stick is and vice versa. For example, a 7A drumstick is much thinner than a 2B drumstick.

Further, there’s also the letter part in drum stick types. These letters originate from the period when drums entered the mainstream.

The letter ‘A’ originally stood for orchestra drumming. These A-drumsticks were used by big band and large orchestra drummers, due to their thinness and softness, which recommended them for lighter drumming sessions.

However, they are now commonly used across many different styles. In fact, 5A is generally still my preferred stick size.

The letter ‘B’ comes from the word band. Logically, these drumsticks were meant to be used by band players, which is still the case today. They’re generally larger than the ‘A’ size drumsticks, and are used by players that want more power in their playing.

Finally, there’s another sort of drumsticks – the ‘S’ type. Their first application was in street bands, which is where the initial letter comes from. Since playing in the street requires loudness and power, they’re the thickest and bulkiest of all these three types.

Drumsticks are made from a variety of materials. Each of them has some special features regarding different drumming styles and sounds. Here are the most widespread drum stick types based on materials they’re made from.

The most popular drum stick material with the longest tradition, wood is perfect for drummers who need to play it fast.

As for the types of wood for drumsticks, oak, maple, persimmon, and hickory are the most wanted ones, each for different purposes.

Oak is a dense and hard wood meant for powerful, ‘heavy’ drumming.

Maple, on the other hand, is the lightest type of wood with low density, which is why it’s a great choice for fast playing needs.

Hickory is harder and heavier than maple, but softer than oak. Being such a middle-of-the-road wood type, it’s the most widespread wood in drumsticks. Also, its elasticity plays an important role in reducing the level of hand fatigue. Because of that, it’s a reasonable option for drumming beginners.

Finally, persimmon is the most exquisite of all the drum stick materials, and it’s usually produced for special drum stick uses, like concert stick sets for snares. It’s a durable, heavy, and dense wood that produces deep, dark sounds. As such, it’s different from other presented woods for drumsticks.

The greatest advantage of carbon fiber drumsticks over the wood ones is their durability. They usually last much longer than their wooden counterparts.

However, you might want to leave this drum stick type for later stages of your playing, since they’re more costly than wooden sticks.

In addition to the density of the material and length of drumsticks, their tips are of great importance when it comes to the quality and type of sound.

Nylon drum stick tips are the best choice for drummers who need a bright, resonating tone. Compared to wooden tips, they can be less harsh on playing surfaces (as the tips don’t splinter), which is why they’re a great option for drummers that play on electronic drum sets. Another plus on their side is long durability and wear-out resistance.

Wood tips are the most widespread type of tips. They usually provide a neutral combo of proper articulation and rich sounds on different elements of drum sets. Still, different types of wood tips will produce different sounds, which we’ve talked about in the previous paragraph.

Swizzle drumsticks have a dual tip. On one side there’s a regular drum stick tip, while the other side of the tips is enriched with a small synthetic ball. This combination enables you to get a smooth and warm mallet sound on tom drums or cymbals.

It’s always awkward dropping a drumstick on stage. Though it doesn’t have to be the end of the world!

When you’re on stage, you might need more than one pair of sticks by your side. Since it’s important to store your sticks properly after the gig, you should get a drum stick holder.

The on stage drum stick holder can hold 8 pairs of sticks. Thanks to its C-shape clamp, you can place it easily on any drum stand, or other pieces of drum sets.

Also, you can easily take your sticks from it or leave them inside thanks to the extension part as you’re playing, due to the 45° angle at which it’s mounted. The cup can be easily taken off and cleaned so that your drums are always kept in a clean holder.

The type of drumsticks you use will depend on your drumming skills and playing preferences. Starting out with more neutral sticks and moving onto more unique ones that provide some special features sound like the most reasonable option.

It’s also important to learn more about the tips of sticks and whether they match with your drum set.

If you’re unsure, I’d recommend starting with the Vic Firth 5A American Classic model drumstick and working from there. It’s important to note that the information in this article about drumstick sizes should be taken as a guide. The actual implementation of these sizes varies based on the drumstick manufacturer. Therefore I recommend that you try numerous different drumsticks to help you figure out the best pairs for you.

Hopefully, this article has provided you with some valuable information that will help you choose the best drumsticks for your needs.