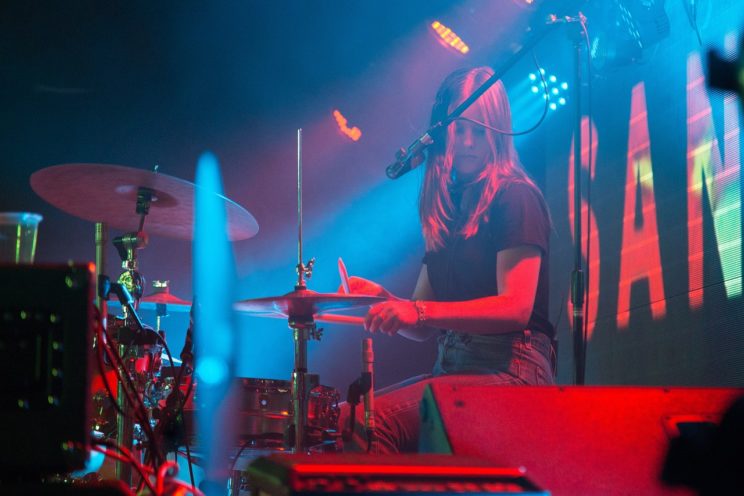 Quite a lot of drummers take on the role of backing vocals or even lead singing. In this case, the microphone needs to be carefully selected for the task.

Since the hands of drummers are taken up by playing drums, and the kit surrounds them almost completely, it’s a bit difficult setting up the microphone so it doesn’t bother them while playing drums. It’s also important that the mic doesn’t pick up too much of the sound of drums around them.

If you’re in a world–famous band and play on huge stages, having your technicians to set up a mic on some fancy stand isn’t much of a problem, but if you’re a gigging player working small venues you know there usually isn’t enough space for that kind of acrobatics with the microphone.

Because there is a large supply of mics on the market, we decided to pick the top 5 microphones for singing drummers. These include headset mics as well as the standard mics, but the mutual characteristic of them all is that they are perfect for use by a singing drummer.

Also, be sure to check out our article on tips to improve your singing while drumming.

Our Pick of the 5 Best Vocal Mics for Drummers

We start off this list with the cheapest mic here, but nevertheless a true competitor with the others. Audio-Technicas PRO 8Hex is a dynamic, cardioid head–worn microphone, that comes at a great price and has great quality.

This mic comes with a sturdy, steel headband with foam headrests to ensure comfort while wearing the set. Mic itself comes on an adjustable arm so you can set it up however you like and by simply pivoting the arm you can swap whether you want the mic on your left or your right side. The set is connected through the undetachable XLR cable (7ft long). Since this is a dynamic microphone it doesn’t have a built-in preamp, but that also means that it will easily pick up voices said into it and with some EQ setting up you will have a great sounding mic on your head. Also, a cardioid build of the mic ensures that it picks up sound only to where its pointing (for example, if you put it in front of your mouth it won’t pick up any sound coming from behind or from the side).

Shure is a famous mic company and it’s BETA line is essentially all specialized for drums and drummers. But, in that line, Shure BETA 56A is a champion for singing drummers, even though it’s marketed as an “instrument microphone”. And it comes at a great price.

56A is a cardioid dynamic microphone, at first designed for tom and snare recording, so it has a recognizable angled look, together with the steel grill cover. It’s connected through the XLR connector and is swivel-mounted. This is not a headset model, so you will need a stand for this mic, but the fact that it has that angle means you can put the stand behind you and not worry about constantly having to avoid the stand while playing.

This is a great little mic that is sturdy, as it’s built from real hard materials. It’s affordable and with it, you get a leather pouch in which you can carry the mic. It produces great sound and because of the way it’s built, it will only pick up your voice clean and crisp, without the hum of the drums in the background.

AKG Pro Audio C520 is one of the most well–known headset microphones in the market today. This is a condenser, cardioid pattern microphone coming with XLR female cable (10ft long), so there shouldn’t be any problems with the cable being too short.

The mic itself has a sturdy, sleek build, so it’s not noticeable you’re wearing it except for the foam cover of the mic that is rather bulky. It keeps on your head by wrapping around the back of your ears and pressing below them. It can get sometimes a bit uncomfortable after several hours of wearing, but if you adjust it right there shouldn’t be any problems.

As for the sound, it has a good quality sound pick-up. The only issue can be that foam cover, but you can simply take it down to get a louder sound to pick up. This is a good, mid-range headset microphone, that will give you proven quality when singing.

Heil Sound PR 30B is a high-end, super-cardioid dynamic microphone used for both vocal and instrument recording. Of course, as a singing drummer, you will have slightly different requests for a microphone than normal singers. This microphone will ensure that when you sing, the microphone collects only the sound of your voice and is not disturbed with both the noise of your drums nor the electric devices around you.

The mic itself is not a headset microphone, so you need a stand, but it can be operated on a joint so there is no fear of mic interfering with your playing. Sound this mic will collect is superb, and really can’t be matched to any other on this list. If you decide to buy this mic you will use it both for live gigs and recording in a studio, as it can provide you with pristine sound wherever you are. But, this, of course, comes at a price.

This is a high-end, high-quality dynamic microphone made to be used by professionals and people who want or need the top class that microphones can provide on a daily bases.

We finish off this list with another headset mic – Sennheiser ME 3-II. This model is a cardioid pattern model, which is slightly different from the rest of the headsets on this list. The largest difference from other sets is that this one is made for use with wireless units. This means that this mic needs phantom power if you want to use it outside of the wireless power unit.

Since it’s meant for wireless use, for the connection it has only standard 3.5mm male jack, so you will need converters and something to power it if you want it to work anywhere else. The set itself is very comfortable, padded all around and can be worn for several hours without a problem. Since this is a cardioid mic, it will collect only the sound coming from your mouth, ignoring all of the other sounds around you.

The only issue with this mic can be that the arm on which the mic itself rests is a tad short – if you like long arms to put the mic where you need it, you should probably skip this model. But, other than that this model will provide you with superb sound quality, and being that it’s wireless you don’t have to worry about cables, stands, and similar stuff.

We hope that this list has helped you in looking at the best options on the market at this time. You can find different solutions, from wired to wireless and from headsets to the standard microphones. Whichever you pick from this list you can be sure that you will get a good quality model.