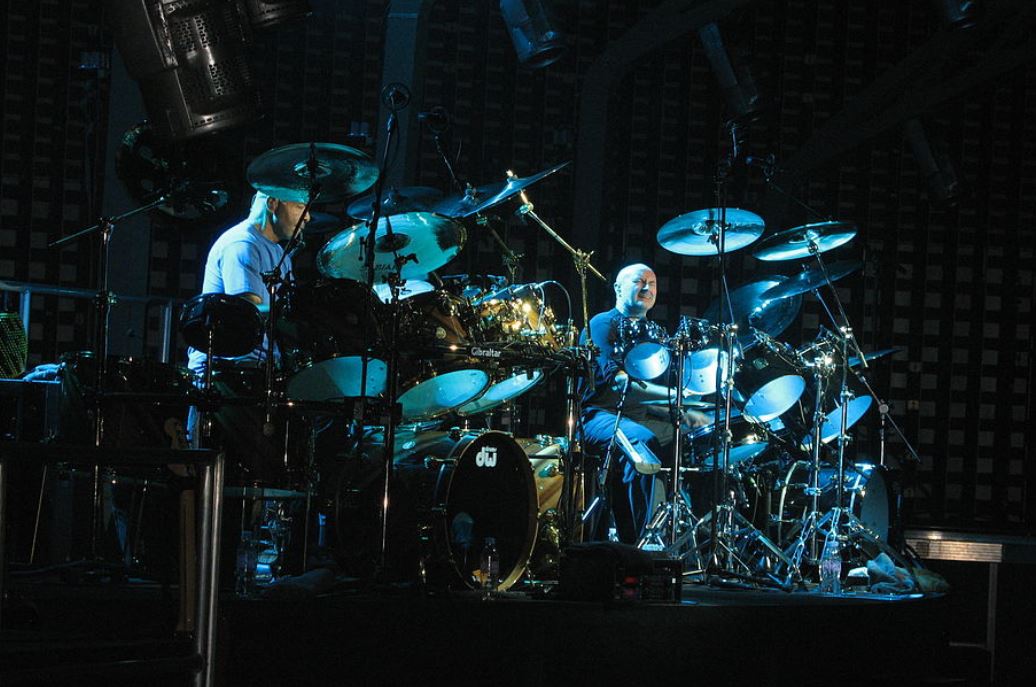 As if playing drums wasn’t hard enough, the twelve drummers featured in this article also put in stellar performances as singers in their respective bands.

In the classic rock band, you can usually see lead singers playing the guitar (usually the rhythm guitar) or not playing any instrument at all.

In these twelve exceptional cases, however, drummers served as great singers too, at least on some of their band’s hits.

If you think that playing and singing at once is just too hard, think again! Let yourself be inspired by these twelve legendary drummers and singers

We can hear his voice and drumming efforts in some famous songs such as In The Air Tonight (video above), and Dance on a Volcano.

Collins also collaborated with other bands either as a singer or as a percussionist. In 1976, for example, he played some percussion parts in Johnny The Fox, the seventh studio album by Irish rock band Thin Lizzy.

Don Henley is the lead singer on some of the band’s most known hits, such as Desperado, Hotel California, The Long Run, Get Over It, Witchy Woman, Best Of My Love, and One Of Those Nights.

Just like Ringo, Don Henley also pursued a solo career after the Eagles broke up, proving to be a great singer and songwriter too.

Featured among Rolling Stone’s 100 greatest singers of all time, Karen Carpenter was also a fine drummer, praised for her ability by contemporary critics and fellow musicians.

Karen used to play the drums, while singing on many of the duo songs, both in live concerts and studio recordings.

This famous beatnik rock band originated as part of the American TV series that went under the same name. However, the series and the songs featured in the episodes were so successful, that the band is still remembered and loved by many rock’n’roll fans.

Drummer Micky Dolenz was the lead singer on many of the band’s most famous songs, including the smashing hit I’m A Believer.

A great multi-instrumentalist, Levon Helm achieved the limelight by working as the drummer and lead singer for The Band, being also praised for his solo work. He plays and sings on the legendary song The Weight.

Canadian power trio Triumph featured Gil Moore as both the drummer and the vocalist, a duty he shared with guitarist Rik Emmett.

A great heavy metal drummer, Gil Moore proved himself to be a strong vocalist and songwriter, as he wrote and sang most of the band’s most famous hits.

Let’s start from the foundation: The Beatles constituted an incredible source of inspiration for younger musicians and bands. They experimented in many possible ways with their sound, their lyrics, and their style.

One of the experiments they did on a few songs was having their drummer Ringo Starr as the lead singer. Ringo sang (and wrote) amazing hits, such as With A Little Help From My Friends, Octopus’ Garden, and Yellow Submarine.

He still plays and sings in the Ringo Starr & His All-Starr Band, a live rock supergroup in which he works as a singer and multi-instrumentalist.

The most prominent one is the romantic ballad Beth, featured in their 1976 album Destroyer. He also sang on Black Diamond and Hard Luck Woman.

The rock band quintet Night Ranger released many successful tracks sung by drummer Kelly Keagy, including Sister Christian, possibly their most famous hit, Sing Me Away, and Sentimental Street.

Known for his incredible falsettos, Roger Taylor is not only a fine drummer but also a very good singer and songwriter.

He sings in Bohemian Rhapsody, where he hits the highest notes in the harmonies. He also sings and plays his ironical hit I’m In Love With My Car.

After Queen broke up due to Mercury’s death, Roger Taylor had a brilliant solo career. He also founded another band, The Cross, where he plays the guitar and sings.

Dave Grohl became famous as the drummer of the legendary grunge band Nirvana, but he is also a really fine singer.

After the death of Kurt Cobain, he founded the band Foo Fighters, where he plays the guitar and sings. Foo Fighters drummer Taylor Hawkins sometimes sings too.

Don Brewer sang in great hits, such as We’re an American Band, Shinin’ On, Walk Like a Man, and Dues.

The list could go on and on, featuring other notable drummers and lead vocalists, such as Dave Clark (Dave Clark Five), Grant Hart (Hüsker Dü), or Sheila E.

What are your favorite singing drummers? Write a message in the comment section below!

4 thoughts on “12 of the Greatest Singing Drummers in History”