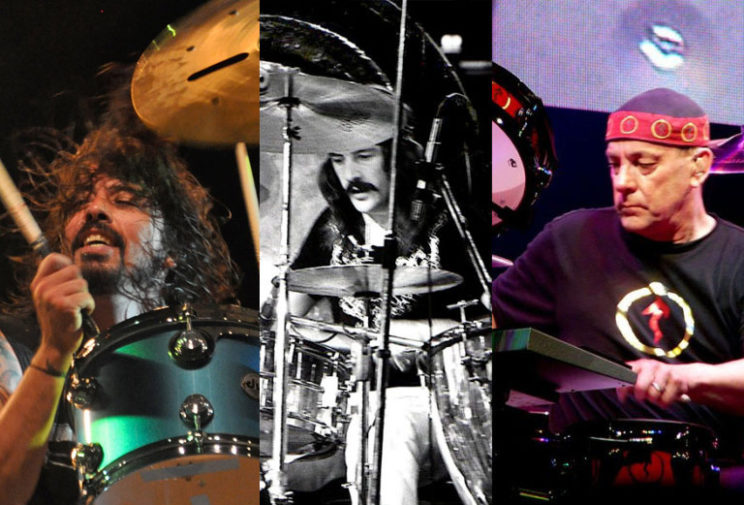 Drumming quotes can hold some great wisdom and lessons from legendary and influential drummers.

This list includes quotes from some of the greatest legends that ever played the drums.

“I love being a drummer. Everyone thinks you’re dumb. What they don’t realise is that if it weren’t for you, their band would suck.” – Dave Grohl

As the drummer of Nirvana, the frontman of Foo Fighters, and a collaborator and member of many other acts, Dave Grohl is somebody with quite a well-rounded perspective on music.

This quote tackles a standard drummer stereotype, and pinpoints how a drummer is a vital member of any band.

“Stamina is the force that drives the drumming; it’s not really a sprint.” – Neil Peart

The late Neil Peart was largely seen as one of the best drummers in the world.

He was the legendary drummer from Rush, and he certainly knew a thing or two about both technical drumming and playing tastefully to the music.

“Playing fast around the drums is one thing. But to play music, to play with people for others to listen to, that’s something else. That’s a whole other world.” – Tony Williams

Tony Williams gave one of the important pieces of advice that every drummer should hear.

Amateur musicians often try to show off with their skills and chops, whereas the real skill can be shown by being able to play to the music and being able to contribute in a way that improves the music to the best of their ability.

A band should produce something better than the sum of their parts.

“You only get better by playing. If you think you stink, you probably do. I consider every drummer that ever played before me an influence, in every way.” – Buddy Rich

Buddy Rich is in many shortlists as the best drummer in history.

However, he was well known for getting straight to the point and being quite harsh in his criticisms. So you know what comes from Buddy Rich is not going to be sugar-coated!

This quote hits home very well. Every drummer needs to continually practice. Never settle with your current ability. You can always get better.

“Drumming was the only thing I was ever good at.” John Bonham

John Bonham was the drummer from Led Zeppelin and one of the most influential drummers that ever picked up the sticks.

This quote might be a pointer as to why he was so good. He focused fully on drumming and improving his craft. He did not half attempt the art of drumming while also trying other things.

We see this as the root of the success of people in music and countless other fields.

“Drums all have their own particulars – each drum has a place where they sound the best – where they ring out and resonate the best, and the head surface isn’t too loose or too tight, mainly so you get a good rebound off of the head.” Chad Smith

Chad Smith, the drummer from the Red Hot Chilli Peppers, has a great quote here about drum sound and drum tuning, which are aspects that many entry-level drummers ignore because they find it too difficult.

Ringo Starr, the drummer from the Beatles, has a passion for drumming and music. This comes through in his music performances and in those all time classic recordings.

Dave Grohl has another very important point of wisdom to share here. You should be willing to take the initiative to learn how to play your instrument yourself. This holds true even if you are undertaking formal music studies.

There was a great video online where he says that musicians should play music together and love the process, no matter how bad they are at playing. That’s what music is about.

I find it interesting how Dave Grohl, one of the most recognized influential and loved musicians in the world he talks about how he ‘faked’ playing these. It’s like he was suffering from imposter syndrome. If somebody as amazing as Dave Grohl thinks that, then that should hopefully put things in perspective for everyone and give them confidence!

“Drumming’s pretty physical. We sit at the back of the stage getting beat up like a workhorse.” – Tommy Lee

Tommy Lee, the drummer from Motley Crue, points to the physical demands of drummers throughout a full performance.

“When Mr. Ludwig invented the bass-drum pedal, that’s what made the drum set possible.” – Neil Peart

The configuration of an acoustic drum set has become quite standard these days. We take it for granted. However, it’s nice to think of a time when somebody taught of a bass drum pedal as a new and novel idea.

This can also open us up to the possibility of thinking, how can we alter and customize our own drum sets in a way that makes them unique and interesting.

Sometimes it’s nice to step back and read some drumming quotes from legendary drummers. The wisdom of such experienced drummers can really help you learn a thing or two.

Even one or two lines can either change your perspective, inspire you, and make you approach your drumming a little differently.

If there are any other drumming quotes that you think should be added to this list and please add it in the comment section below.