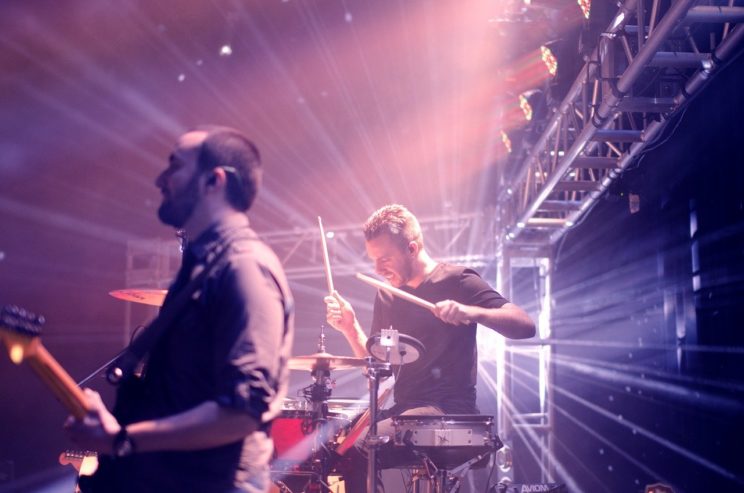 Open-handed drumming is an alternative approach to the traditional style of cross-handed drumming. This article shows you how to play opening handed. We will also explore the pros and cons of this approach.

Open-handed drumming is an approach where the drummer does not cross hands while playing between the snare and hi-hat.

Let’s be honest, the only reason most of us cross our hands to play the hats/snare is due to tradition, or because we’ve seen our drummer idols do it. Most musicians grow up watching drummers who only played cross-handed and never pause to contemplate the shoddy ergonomics of it!

We will discuss the pros and cons of open-handed drumming later in the article. But first, let’s talk about how to get started.

How to play Open Handed

For starters, check out this great demonstration by Dom Famularo below. He co-wrote a great book on this topic (Open-Handed Playing, Vol. 1), which is worth checking out.

1. Adjust your drum set orientation to suit your new style.

You probably need to lower your hi-hat height a lot to maintain good posture.

If you want to use your left hand on the ride cymbal, then you should move that cymbal to the left-hand side of the set.

The rest of the set can remain the same

Start with an easy, straightforward groove using quarter notes on the hi-hat and a steady backbeat on the snare (2 & 4)

Focus on sounding even and maintaining good time. Don’t worry about speed.

As you get better, work up the hi-hat count to eighths and sixteenth notes.

Don’t get discouraged by the adjustment curve, it gets easier with each session

3. Try to play some songs using the open-handed method

Once you can play basic grooves in the open-style. Pick a song (any song) and start playing along open-handed.

Eventually, as you get a good grasp of the basics, you can check out some of the learning resources mentioned later in this article to help you improve.

Can you imagine driving a car cross-handed, or always playing a piano that way?

Those who adore this technique consider cross-handed drumming an ‘accidental and accepted’ inadequacy of ergonomics.

Though the discussion runs deeper than such oversimplified internet rhetoric, open-handed drummers most certainly don’t have to deal with the congested and awkward movement of cross-handed playing.

Opens up Your Set

Open players have a lot more access to each part of the set at any given point of time when using the open-handed approach.

For example, Use the cross-handed method and play eighth notes on the hi-hat and hit the snare and follow it up with a tom hit and a floor-tom hit. Try the same thing using the open-handed style. Do you see how stroppy it feels to do it with your arms crossed? How about trying playing a swing pattern on the ride and a continuous rumble on the floor-tom simultaneous?

Many drummers spend a fourth of their practice time playing open-handed just because it opens up new avenues. The variation in the style/approach forces you to think and redefines your playing when it hits that inevitable plateau we all dread.

As a drummer, both your hands hit the drums in a similar fashion. Every drummer yearns for ‘equalization’ or ambidexterity – to be equally skilled with the right and left hand. Open-handed drumming assists in bringing the weak hand to par with the dominant hand and makes it equally capable to lead the beat. Once this skill sticks, it will cross-over into any styles you play in.

Open-handed drumming is rapidly becoming a legit part of the contemporary drum syllabus. Modern Teachers have started to recognize it as a mandatory technique to be a well-rounded drummer. At the end of the day, even if you prefer to play close-handed, having this skill will work to your advantage in various situations.

You don’t have to pick one style and ignore the other. Many drummers use both open and cross-handed in their career to achieve different results, based on the genre, groove, setting, and intended sound. Many drummers never play open-handed live but still include it in their daily practice routine just to build co-ordination and improve their non-dominant hand.

Modern Rock and Metal drummers realized that open playing eliminated the ‘roof’ of the hi-hat playing arm over the hand that hit the snare. This gave them the full range required to blast out the snare hits and rimshots. This has caused a surge in the popularity of this style in heavier genres of music.

Your weak hand leads the hi-hat

The hi-hat often has much intricate grooves than the snare.

When playing open-handed, you will be leading the hi-hat with your weaker hand.

It can take quite a bit of practice to get used to this.

The most obvious downside to open drumming is that you have to retrain your hands. You return to uncharted territory because you are leading with the non-dominant hand. If you have been drumming for a while and decide to try out this technique, you might feel frustrated as you start down the ladder again.

This will require patience, perseverance, and consistent practice.

Open-handed drummers get a taste for what left-handed drummers have to go through when it comes to sharing a kit at multi-band events or open jam sessions. Though you may not have to make as many changes as a leftie would, you often only need to make some minor changes to the drum set orientation to get it ready for open-handed playing.

Of course, you do not need to pick one or the other. You can work open-handed drumming into your practice routine to improve your development and give you more freedom of expression around the set.