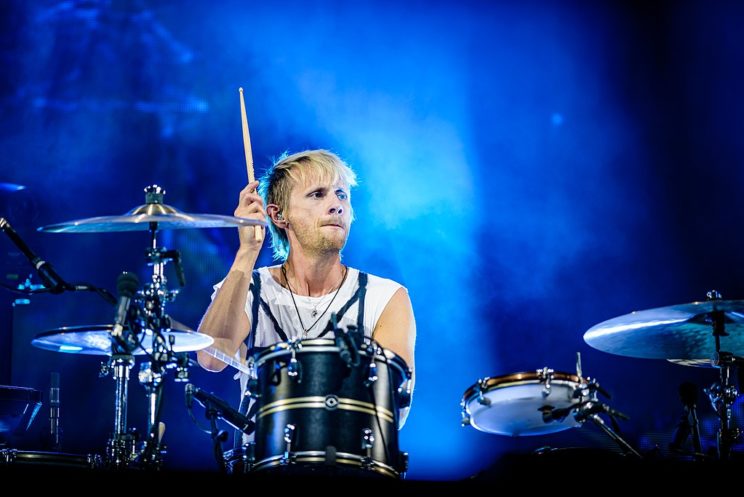 A drum set in a left-handed configuration simply mirrors a standard right-handed setup. Your hi-hat goes on the right, the right cymbal on the left, and the bass drum on the left.

Scientists have shown that people are either born with a right-hand gene or a non-right hand gene. And, about one-tenth of the world’s current population is left-handed. But lefties (or southpaws as they are commonly known) often get the short end of the stick because society is oriented and designed for the majority.

For this very reason, many left-handed people are forced (either by teachers or due to a lack of options) to adjust or repurpose their wiring and learn things in an arguably unnatural way. This problem extends into the world of drumming as well.

In this article, we salute all southpaws out there and outline the general aspects of left-handed drumming alongside some helpful tips to help you understand what you are signing up for.

The traditional technique to play drums is called cross-handed technique. This works perfectly well for right-handed drummers because the conventional drum setup enables them to play the kick with their right foot, the hi-hat with their right hand, and the snare with their left. Now if you place a left-handed person on their kit, they would need to make quite a few changes to play the kick with their left foot, hi-hat with the left hand, and snare with the right hand.

Let us assume you are a left-handed drummer. Your stronger/dominant hand will be your leading hand. This means you play time with your left (hi-hat) and the backbeat (snare) with your right. If you play a simple eighth note beat for one measure (four counts), you will strike the hats eight times (left hand) and hit the snare (right hand) only twice.

Do you see how your dominant hand does more work? Add syncopation or imagine complex fills at 140bpm and it becomes a lot more relevant.

If you tried to do it the other way around – your right hand would play eight times and your left would only play twice. As a southpaw, you are probably more comfortable with your left hand playing the hit hat. But this means you need to mirror the drum kit and set it up in a completely different way than a right-handed drummer would.

But isn’t it possible for a left-handed person to play right-handed drums? Yes, of course. With enough training, this can be achieved and it has been done by numerous world-class musicians. Most southpaws find no difficulty in learning and playing the drums as if they were right-handed. However, this may take additional effort during the early stages of your learning.

Should you learn to play left-handed?

If you’re left-handed, then playing a drum set in a left-handed configuration can feel more natural.

As for the cons, you will find it hard to share a drum set in jam sessions or on stage with other bands. You may also have trouble finding an instructor or feel disoriented while watching instructional videos.

Luckily, you don’t need any special drum kit because you are left-handed. The exact same drum kit can be set up in a different way to accommodate a left or right-handed player. But, the kit will be oriented in the opposite way (mirrored).

The only exception to this is a double pedal which a) is not mandatory to use b) is only applicable to intermediate drummers and certain genres, and c) has an easy workaround because reversible double pedals are now being sold in the market.

As for learning, most teaching materials (like drills and paradiddles) have the same exercise starting with both hands. This is because the end game as a drummer is to be ambidextrous and attain identical skill and agility in playing and leading with each hand.

So the long answer is: It is perfectly fine to play left-handed drummer as long as you are fine with the consequences. Alternatively, if you can shift to playing right-handed, this may be a more practical choice in the long run.

Open-handed drumming is considered to be a different technique altogether. It is also referred to as ‘uncrossed’, ‘open-handed-drumming/”>open drumming’ or ‘left-hand leading’. As the name suggests, an open-handed style entails not crossing your hands while you play.

Most open-handed drummers modify the kit in a way that doesn’t require them to cross their hands at any point while playing time. This usually means shifting the ride and cymbals to the same side as the hi-hat. But it isn’t bound to any rules or genre and with a little creativity, you can make things work in any context.

If you need further clarifications you can watch Carter Beauford demonstrate open-handed drumming.

Teaching southpaws can be challenging for right-handed instructors. The main reason for this is that private instructors usually have only one drum kit in the rehearsal space.

This means you have to constantly reorient the kit and reposition it again when that student leaves and the next right-handed student walks in. This can be time-consuming, tedious and confusing.

Even if you have two kits, there can be a lot of confusion when you explain concepts and all the visual cues a student gets from an instructor can disorient them.

The obvious workaround to this problem is to teach students to play the same way as any right-handed person would. Although, this would be easier for the instructor and may lead to a sharp adjustment curve and discomfort for the student.

I say ‘may lead to’ because most left-handers have spent their whole life using right hand oriented equipment (like a computer mouse or a car) which trains them to some extent to lead the drums with their right hand.

It is not an insurmountable task and many great drummers are left-handed but play right-handed, probably for the same reason.

When we say ‘left-handed’ we tend to forget about the feet. Just like the arms, everyone has a dominant foot and an off foot. Can you imagine asking a pro-athlete soccer (football) player to take a penalty kick with his off-foot?

Luckily, many southpaws have a dominant right foot. If this is the case, there is a chance that they can comfortably switch to playing right-handed.

Additionally, you can opt to teach them the open-handed technique which we will discuss later.

In conclusion, instructors should use workarounds only if they feel that a left-handed student is equally enthused about it. Even so, open-handed drumming seems like a more compassionate option than entirely reorienting a student’s physiological preponderance.

Ultimately, forcing a southpaw to play right-handed will diminish their interest and result in them eventually quitting. This is best dealt with on a case by case basis. Take some time to experiment with all the options and see how a student responds. Take note of his grasping power, comfort level and physical preferences. Prioritize their preference above your comfort. At the very least, a new challenge will help you improve as a teacher as well.

Here is a brief list of noteworthy drummers who have led the way:

There are times when being a left-handed drummer may feel like you are swimming against the tide. But in the larger picture, regardless of what you choose, you ought to be fine. And for all you southpaws out there, don’t forget – we’ve still got it better than lefty guitarists… well, at least in this aspect!