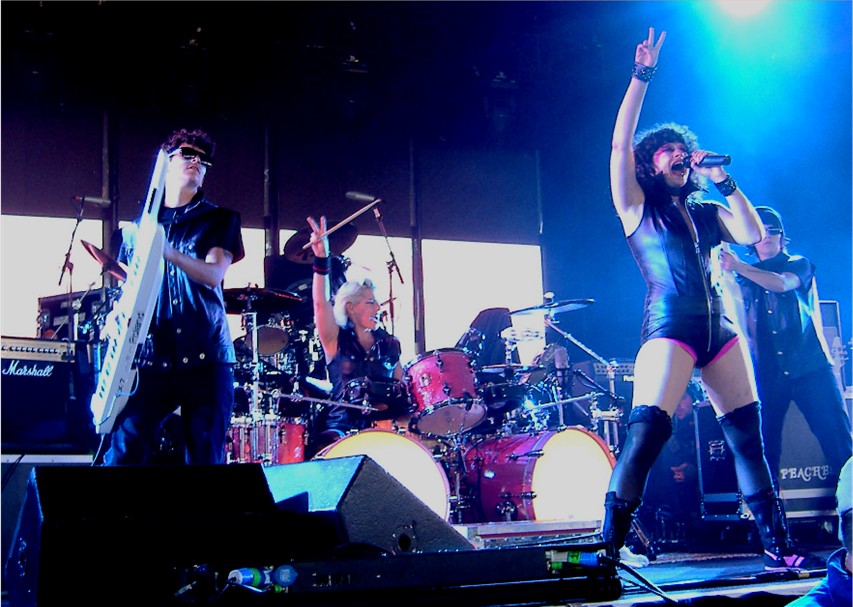 New York City-native Samantha Maloney is approaching her 45th birthday and her 17th year as a professional drummer in many different bands and projects.

From the legendary riot band Hole to world-famous Mötley Crüe, playing for Eagles of Death Metal and Joan Jett too, Maloney proved herself a versatile and talented drummer, able to grasp various elements of rock’n’roll.

Moreover, Maloney also experimented with film scores, working with veteran film composer Hans Zimmer and on her own tracks.

Hollywood was a significant step in her life, as she even worked as an actress in the popular TV series Californication and in the 2006 movie Factory Girl.

Her fulfilling artistic life began in Manhattan, at the esteemed Fiorello H. LaGuardia High School of Music & Art and Performing Arts, the school portrayed in the 1980 film Fame.

Let’s dig a bit deeper into how Maloney reached her own fame.

From Shift to Hole

At the age of sixteen, Samantha auditioned for the post-hardcore band Shift, obtaining immediately a spot at the drumming stool.

After a few years on and off stage, the band obtained a prestigious deal with Columbia Records and released their 1997 debut album Get In.

But when Patty Schemel was sacked from the alternative feminist band Hole, Maloney was invited to Los Angeles to audition and take her place. After a successful audition, she left Shift to join one of the most popular all-female bands of that time, playing huge arena shows and becoming a celebrity herself.

When Courtney Love’s band came to a stop, in 2000, Samantha already had a few new cards to play. Her drumming abilities were well-known in the rock’n’roll world and that’s why Mötley Crüe called her in to fill for Randy Castillo, too sick to play their Maximum Rock tour. During her experience with Mötley Crüe, who also happened to be her teenage idols, she managed to meet the favor of the band’s fans.

Samantha described her touring days with Mötley Crüe as a surrealistic experience. As a young girl, she decided to play drums right after watching Tommy Lee playing in the Wildside video. It must have been, therefore, quite an honor for her to join the band she had looked up to towards her whole drumming life.

Solo Projects and Other Bands

In 2003, she decided to turn down gigs proposals to focus on her own compositions. After a decade of playing in other people’s bands, Samantha Maloney felt the need to develop her own songwriting and creativity.

However, after only one year she started to be sought after by a good bunch of former bandmates and other rock artists.

Courtney Love involved her in a new idea, The Chelsea (a name Maloney herself chose as a tribute to a brief project started in 2002 with Melissa Auf Der Maur and other alternative players from different rock bands). The band performed a few shows but it soon got to a stop, especially due to Love’s excessive lifestyle and troubles with justice.

In the same period of time, however, her friend Josh Homme asked her to join his band Eagles of Death Metal to open the Queens of Stone Age’s upcoming world tour. This marked another fulfilling touring experience for Samantha, who went on joining different bands and projects up.

Some other notable collaborations included The Donnas, The Ingenues, and Brother Clyde.

Samantha is surely a versatile drummer, able to switch from one rock sub-genre to another with ease and confidence.

Her timing is precise. She plays exciting fills. She has energy and style. It is no wonder she was one of the most sought-after drummers throughout the 90s and the early 2000s.

Maloney probably gives out her best when playing on Mötley Crüe’s rich and pompous sound, but her drumming was also an important part of the Hole live concerts throughout the second part of their career.

Samantha Maloney plays Sonor Drums and Zildjian Cymbals. When scoring music for TV and movies she also uses some electronic equipment such as a Roland Keyboard.

Are those drumsticks for your boyfriend?

Maloney often highlighted how being a woman in the music industry, especially as a drummer, can be a tough game. She also reported what the music shop clerk asked her while she was buying her first set of drumsticks: “Are these for your boyfriend?“.

Her presence in various all-girl bands and her association with the riot grrrl project Hole could indicate her feminism or, at least, a certain attention to the theme of the female condition and women’s rights, especially in music.

Samantha Maloney is indeed a strong example for any woman who’d like to pursue a career in the world of rock. She proves that a solid practice and an authentic love for the genre you play can make you achieve incredible results.