It’s hard to describe Scaler in a few words, despite that most reviewers see it as an amazing composing tool. That’s absolutely true, but this plugin is much more than that. It is a perfect learning tool, which can be used not only by those who aren’t too much into music theory, but also by those who are willing to learn, to expand their knowledge not just in terms of scales and chords, but also in terms of music theory in general.

The Scaler offers an enormous library of chords and scales, pretty much everything we know in music today. However, the beauty of this software isn’t in that impressive amount of data, but in its ability to come up to you with suggestions that can completely change the way you make music. Simply said, this is a super-practical tool, with great learning potential. Definitely, something you should try.

Those would be the three words that describe this plugin best. Practically, that’s the way this plugin works. It has a huge database of scales, modes, and chords. The first thing it does is detection. Once you play a couple of notes or chords, this plugin will instantly detect all the notes you’ve played and a couple of moments later, you will get a list of suggestions, which includes scales and chords that could be the best fit for your bunch of notes.

A great thing about this suggesting process is that the software won’t just show scales and chords that perfectly match the notes you’ve played. Of course, these will be ranked at the top, but the plugin will also suggest a list that includes scales and chords that aren’t perfect matches, but rather miss a couple of notes. Those who prefer jazzy tones will find this extremely helpful in finding exotic jazz chords and similar things.

The next step would be to pick a certain scale, mode or key that sounds like a perfect fit for you. This is where the “Expand” word takes the spotlight. Once you’re done with your picking, the plugin will show you all the chords that belong to a key you’ve picked. In that way, you will be able to make any kind of chord progression with ease. Without the Scaler, this requires huge music theory knowledge and years of experience. 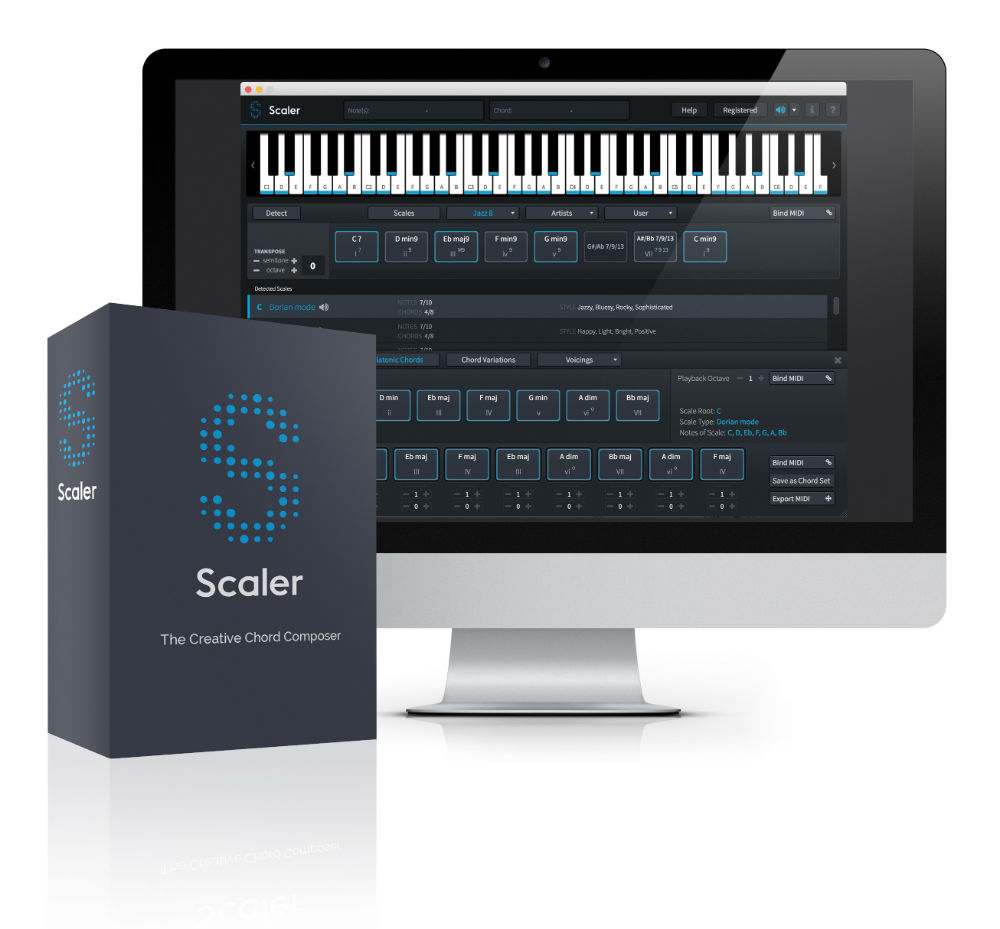 This plug-in is not only smart, but also very easy to use, thanks to an impressive graphical user interface. The overall GUI is extremely transparent, so everything is either onboard or just a couple of clicks from you.

The board is divided into several sections. On the upper side of the board, you will find a large “detect” panel and a piano keyboard. Once you hit detect button, all relevant notes will be highlighted on the keyboard. Right beneath, you will find all the notes and chords, so you will hardly miss something.

Also, you will find a trio of buttons which make this plugin even more convenient. If you don’t want to bother yourself with note importing, you can simply use one of the numerous presets that this plugin includes. You can see three buttons, which are named as  “Scales, Songs, and Artists”. These buttons are shortcuts to a large library of pre-selected notes and chords. For example, the Artist button includes a lot of presets that were made by renowned artists like Carl Cox, Josh Abrahams, and MJ Cole. These presets are an excellent starting point if you lack inspiration, but can serve as great learning tools as well, considering that you can modulate these presets in so many ways. The more you experiment, the more amazing things you’ll find in this plugin.

Everyone Should Try It

I understand that you probably look at this plugin as a perfect tool for those who don’t want to bother with theory too much. There is a big number of good composers that don’t understand music theory. A common thing for most of them is that they usually stick to their habits, which are related to some more familiar patterns and rules. This plugin seems like a perfect opportunity to get out from a rut.

However, Scaler can also be a great tool for those who understand music theory to some point. This seems like a perfect tool to expand knowledge and to learn in a more fun way. For example, someone who understands music theory to some point can easily go beyond his knowledge or even try to compose in a completely new genre. This particularly refers to musicians who prefer jazzy sound but don’t know much about uncommon scales and modes, don’t have to big chord vocabulary, etc.

Things with Scaler are relatively simple. Of course, you will need a DAW host and a good thing to know is that this plugin works with most major audio workstations. Depending on the software, the setup process will take a couple of more or fewer steps, but things are usually quite simple. The plugin is available in AAX, AU and VST formats.

When it comes to OS compatibility, both Windows and Mac OS versions are available. When it comes to Windows, both 32- and 64-bit are there, while Mac users can get 64-bit version only.

The Scaler is an amazing tool but also has a couple of limitations. The main complaint goes to MIDI file export. You don’t have too many options after you’re done with detection. You can’t set length for each chord, edit velocity or get any kind of preview. Practically, all you can do is to export block chords to your DAW and then start with tweaks. We do agree that this is a little bit rudimental and that slows the workflow but doesn’t change the fact that this is an amazing plugin. After all, we have no doubt that the upcoming updates will bring a lot of features that will improve MIDI export functionality and make this plugin more functional and practical.

Today’s common DAW software usually includes a certain amount of theory features. Also, there is a number of plugins that can be quite useful. For example, there is a plugin called Captain Chords, which is a direct rival. It offers an even wider range of options, including things like melody and bass line writing. However, most users still prefer Scaler, because it seems a little bit more intuitive and ensures faster workflow.

Also, there are several plugins that have some of the features that Scaler offers. For example. The Chord Guru is able to make a chord pattern based upon a specific key/scale combination. However, it doesn’t come with such powerful detection features. Another interesting plugin is AutoTheory Pro by Mozaic, which can provide you with a bunch of chord and melody suggestions.

For many musicians, the Scaler looks like a perfect composing tool. It is a perfect plugin for those who don’t understand music theory pretty well and besides being a great composing aid, it can also serve as an excellent learning software. It will bring your composing skills to a completely new level, no matter if you have limited knowledge of music theory, or you simply lack inspiration. For many musicians, days of the compositional rut will finally be over.

Of course, the Scaler has drawbacks as well, particularly in terms of MIDI export features. It’s not a perfect plugin but can become only better with future updates. 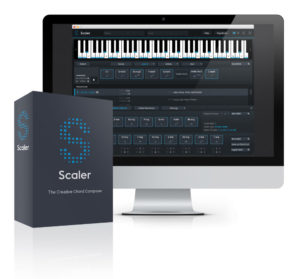