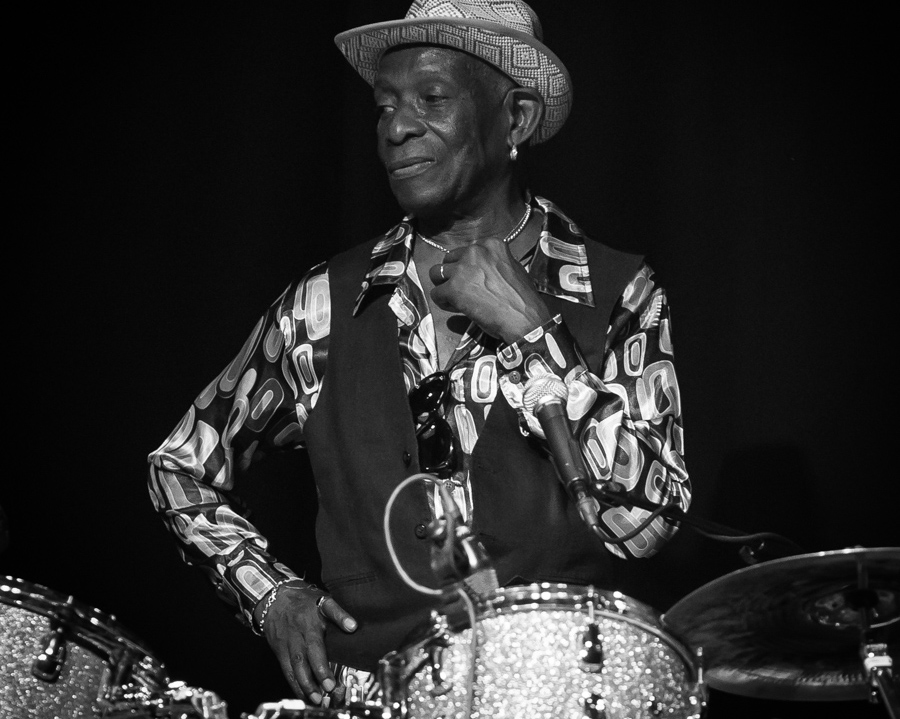 Legendary drummer Tony Allen, who shaped the rhythm of Afrobeat music with fellow genius and friend Fela Kuti, has recently died in Paris, at the age of 79.

Considered by Brian Eno as “perhaps the greatest drummer who has ever lived”, Allen has surely left a big void in the fields of jazz and world music, having inspired countless musicians in other genres too.

The rise and the development of Afrobeat was surely an important part of the history of world music. How did it shape the music scene throughout the years? What role did such an inventive drummer play in this new genre?

In this article, we will try to map out the most important moments in the life and the career of the Nigerian musician who helped create a whole new musical culture while developing a very personal drumming style.

The Origins of Afrobeat

A sort of magical encounter between the African soul and the Western influence, Afrobeat was an invention of Fela Kuti and his band, of which Tony Allen was a prominent member.

Joining elements of the traditional West African music to the influences deriving from various American jazz styles, from highlife to funk, Afrobeat included very complex rhythmical patterns, energetic performances, and traditional African instruments (such as the akuba and the shekere) merged in a classic jazz band (with guitars, brass instruments, keyboards, and vocals).

Polyrhythms are probably the most important feature in this exciting and brisk style, also characterized by the African-derived chanting singing style.

Tony Oladipo Allen was born in Nigeria in 1940. He started a precocious career in the fields of radio and sound engineering, having studied electronics from a very young age.

His love for music soon led him to study drums and other percussion instruments, influenced by both the traditional African sounds (brought home by his father) and the American jazz influences.

His favorite drummers at that time were Gene Krupa, Art Blakey, Max Roach, Evling Jones, Philly Joe Jones, and Tony Williams. As he himself stated in his 2013 autobiography, “These guys were telling a story by playing different rhythms, and they were doing it with independent coordination. That’s the way the drums should be played.”

As part of the legendary Cool Cats, the band founded by Nigerian trumpeter Victor Olaiya, who died only a few weeks before Tony, Allen developed a style of drumming which was quite peculiar and personal. The seeds for his later collaboration with the innovative band founded by Fela Kuti were sown.

Tony Allen joined Fela Kuti and his jazz band in 1964. This first core of extremely talented and inventive musicians later became known as Africa ’70, with Allen becoming the musical director of the formation.

The band was the first proper project to play such an exciting blend of jazz, highlife, Yoruba, and other traditional African influences.

Through his experience with Africa ’70, Allen developed his personal drumming style, even more than ever, adopting an improvisatory approach that suited the long sets played by the band in an interesting and exciting manner, rather than a repetitive way.

A self-taught musician, Tony Allen found an individual, somewhat unorthodox way of playing his drums. An example of this is his prominent use of the hi-hats, used as an integrated part of the polyrhythmical layers of his playing, an approach many other drummers would consider quite unconventional.

As he explained in an interview with the Guardian, he would use all of his four limbs to create different patterns, splitting his playing into four specific ideas overlapping onto a central concept.

Despite this personal and inventive approach, Allen didn’t last for long in Africa ’70. A few issues concerning royalties, in fact, made the relationship with Fela Kuti rather cold and turbulent. For this reason, Tony Allen decided to quit the band in 1979, to focus on a new project and a new genre derived from African and American music.

For his first project under his name, No Discrimination (1980), Tony Allen chose a very peculiar sound, that blended elements of electronic music, rhythm & blues, rap, and jazz into a hybrid genre he called afrofunk.

Moving from Africa to Europe, choosing London first and then Paris as his home, Tony Allen had the chance to leave his mark on many different projects recorded by important artists, highlighting the union of the African and the Western culture even more. Among the many personalities he collaborated with, we can find Charlotte Gainsbourg, Sébastien Tellier, and Oumou Sangaré.

Fela Kuti and Tony Allen successfully blended danceable beats to politically and socially aware lyrics, in an era, the 1970s, which was no stranger to cultural and generational turmoils.

With songs more and more focused on the difficult political situation of his Country, both Fela Kuti and Tony Allen had to go through some hard times in Nigeria. Despite the harshness of those times, their music laid a strong foundation for later artists, such as Peter Gabriel, who recently paid homage to Allen stating: “As a musician and aspiring drummer, it was thrilling to get lost in their new, smart, sexy, and political music full of killer grooves.“

Allen had fans (and collaborators) among younger musicians too, such as popular bands Blur and Gorillaz, proving his music to be timeless.

He will be hugely missed.