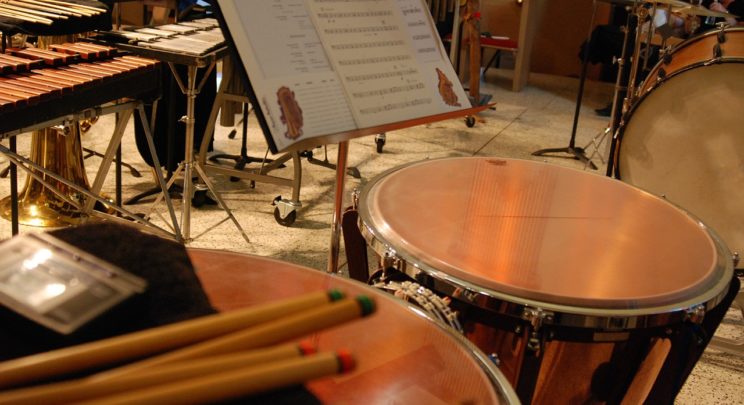 They are among the largest, heaviest, most challenging musical instruments on the planet. They have a place both in classical orchestras and rock’n’roll ensembles. They are versatile and their sound is energetic, echoing almost a thunder.

Timpani, or kettledrums, are an essential part of any classical orchestra. They are large semi-spherical drums made of two main components: a head or membrane, and a bowl.

To produce a sound, timpanists strike the head with a mallet. To produce the pitch required, the musician has to quickly change the tuning, usually through the use of a pedal.

A Timpanist, not a 'Drummer'
Musicians that play the timpani are called Timpanists. They are not referred to as ‘Drummers’!

Each timpano has a range of a perfect fifth, with a starting note depending on its size.

Kettledrums are quite hard to play and for this reason, they are not a very popular option for young percussionists.

Here’s a list of ten facts you may not know about timpani.

The singular for one of these drums is a timpano, the plural is timpani.

The video below shows the power and effect that the timpani can have:

1) They were military drums

Their use dates back to the 13th century when Crusaders and Saracens brought similar Arabian naqqara to Europe. These percussive instruments were way smaller in diameter (about 8 inches). They were the protagonists of military ceremonies throughout Europe until the 16th century.

From around 1400, a larger version of these drums evolved in France, becoming the direct ancestor of the modern timpani.

From the 16th century, these military drums were often mounted on horses.

2) The player can change their pitch

Modern timpani can be tuned quickly through a movable foot-pedal.

The challenge, however, is to tune them while the orchestra, with its gigantic sound, is playing. This is a hard task for two reasons: the player must have a perfect ear to keep their instrument in key with the rest of the ensemble; they must also keep their ears very close to the timpani to be able to hear what pitch they are playing.

Chain timpani, on the other hand, don’t have pedals. The tension of the head is controlled by a roller chain, making the tuning process even harder.

3) Timpanists have a high-paid job

The scarcity of professional timpani players makes this role one of the highest paying in the whole music industry.

There are few timpani players for two main reasons: the difficulty of the instrument and the pressure deriving from having that role in an orchestra.

Playing timpani is hard, as a player needs a perfect sense of timing and a very strong ear. The tuning process can otherwise be a pressure-filled nightmare.

These drums are also very loud and heavy, which makes them very awkward to transport and carry.

4) They are very expensive instruments

A timpanist has to invest quite a lot of money to get a proper instrument, and this is another reason motivating the fact highlighted above.

Prices vary, depending on the brand, the size, the material, and other similar factors.

5) They are very heavy instruments

There’s no doubt: carrying timpani around is exhausting!

A single timpano can weigh up to 140 pounds. Now, consider they usually come in sets of five. Quite a challenge!

6) The Moon of Pejeng

The largest kettledrum in the world is an ancient bronze timpano found in Bali in 1705 and dating back to 300 B.C.

It is 73 inches high and it has a diameter of 63 inches. It is still conserved in Pejeng, near to the Ubud district.

A Balinese legend recounts that the Moon of Pejeng was one of the wheels of the chariot dragging the moon in the sky. It is certainly big enough for that job!

7) Timpani are traditionally made of copper

Although they can now come in fiberglass or aluminum, the traditional and most effective material to build the bowl is copper.

Heads are either goatskin or plastic. While plastic is more durable and inexpensive, some timpanists still prefer the traditional goatskin heads for their warmer sound.

8) Timpani comes from a Latin word

Tympanum was a sort of tambourine in both ancient Greece and Rome. Its main use was religious, especially for the cult of Cybele or for wild Dionysian rites.

The Italian word timpano (the singular form of timpani) highlights a strong connection to this ancestor instrument.

9) There are many different types of timpani

There are also two possible mechanical systems to tune the timpani.

Pedal timpani are the most common ones and they use a metal pedal to adjust the pitch.

Chain timpani, far less common, present a roller chain controlling the tension rods. The player can adjust the tuning by tightening or loosening the handle connected to the roller chain.

Chain timpani can come at handy when a musician must place the drum behind other instruments, having no room to hit the pedal. They can also be manufactured to achieve special low or high notes.

10) Their role in contemporary music

Timpani ended up in many rock bands. From the Beatles to Beach Boys, from Queen to Led Zeppelin, they became a huge part of the 1960s and 1970s pop-rock sound. They can also be found in electronic music, at least in their sampled version.

Their use in pop music shows how their rumbling sound can be a versatile, distinguishing feature in any style or genre.

So there you have it, 10 interesting and fun facts about the timpani.

The next time you think the Timpanist has an easy job in the orchestra, think again!

1 thought on “10 Great Facts About The Timpani”