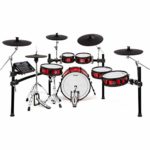 The Alesis Strike Pro Special Edition (SE) is an impressive e-drum set that offers excellent value. Its drum module is one of the best in the industry.

The special edition version of the drum kit has significant improvements to its build quality compared to the original version. Therefore, the changes are not merely cosmetic!

Design and Features of the Kit

The main design of the kit is very similar to the Alesis Strike Pro. It has a kick drum, snare, 4 toms, 4 cymbals, and a hi-hat. This gives you enough space to play anything you wish, and you can even put extra items on the coming rack.

The main feature of the drum shells is the 20” kick drum. It feels the same as when you play acoustic drums, giving you a much better feel and helping you transition more easily.

The cymbals you get with the kit are three 14” crash pads with choke functionality, a 14” hi-hat, and a 16” 3-zone ride. All of them are made out of thick plastic made to resemble the original cymbals when being played.

The drums are made from wooden shells with mesh heads on top. You will get the feel of playing an acoustic drum kit even though you’re playing an electronic one.

They also look great on stage, as nobody in the audience can guess what they are looking at are e-drums and not a standard drum set. The set doesn’t actually need electronics to be played, and it will work as an acoustic drum, but, for that price, you’re not buying it because of the acoustic part.

The great thing about this set is that it also comes with a pretty solid rack. This means that you get very good adjustability in a similar manner you would from an acoustic drum set. Note that you don’t get a hi-hat stand with the kit, though.

The original Alesis Strike Pro was released probably too early and wasn’t as developed as it should have been. Even though it had most of the features the SE has, it had much bigger issues with the build quality. This is the main reason why you will see so many negative reviews for the Alesis Strike Pro drum kit if you look for it online.

The Strike Pro SE resolved many of those issues and is actually what Strike Pro should have been in the first place. The triggering mechanisms of the main pads were completely reworked.

Among the biggest complaints about the original model were the hi-hat and ride cymbal pad that faced significant built quality issues. These were both improved in the newer version, and the SE has a brand new hi-hat which is much more durable and better working.

The most obvious difference is that the SE version has a bigger bass drum.

Last but not least, they changed the color of the mesh heads, as it turns out that people didn’t really like black mesh heads!

What sets this kit apart from the rest (and, to be frank, is the main selling point) is the module. The module you get with the Strike Pro SE can rival any high-end big brand module. It comes with a whopping 45,000 samples made from 1,800 instruments and 136 built-in custom kits.

You can also use a USB connection or a 16 GB SD memory card to add anything you want to this module. It comes with an onboard sampling option, giving you an option for adding on-the-fly changes to your sound. You can also use Strike software for sound editing and uploading the sounds.

Alesis keeps bringing out content updates for this module, so it will get better over time, and you won’t be stuck with the same sounds forever.

How Does the Triggering Perform?

The drum heads and cymbal trigger had some issues in the past, so Alesis went for solving those first. All toms and cymbals now come with 3-zone triggers, which work very well. You should note that they are still not as good as high-end Roland pads and modules when it comes to triggering.

The main advantage is that they won’t break as easily as they did in the original version, and you can work them round the clock as they should work. However, the sound of the drum module is fantastic, so it will compensate for some of the subtle differences you can lose on the triggering not being the best on the market.

As we’ve mentioned, the hi-hat has been the biggest issue on the original model of this drum kit. Alesis decided to scrap it altogether and build a totally new one.

You will still need to play a bit with the triggers to find the setting that suits you the best, but once you get over that, you’ll end up with a very good, long-lasting hi-hat. Also, keep in mind that the hi-hat needs a separate stand that’s not included in the kit.

You can always load your own samples on the Strike module. This module comes with an 8 GB SD card inside it, but you can expand the storage. It’s recommended to use 40 MB/s Class 10 SDHC cards formatted to FAT32.

When loading the samples, you can record them directly to the module, but you can also upload them from your computer. All of the sounds can then be changed through the module operations without the need for a computer.

MIDI Connection to Your Computer

The Strike Pro module has both a MIDI and a USB connection to the computer. A 5-pin MIDI connection can be made to use the drum kit as a controller and a standard USB connection as well.

The Strike Pro SE works as an ideal MIDI controller for VSTs such as Addictive Drums 2 or Superior Drummer 3.

Our main recommended alternative to the Alesis Strike Pro SE is the Roland TD27-KV. There are quite a few things to weigh up when deciding between these, so make sure to check out our article on the best electronic drum sets to understand these before buying.

Alesis Strike Pro SE is definitely an improvement on the original model. The original had some issues and really wasn’t the best Alesis had to offer, but this SE model sets the record straight.

Even though this is still not the best e-drum on the market, it brings the fight to the big brands. There is still some space for improvement in the building department, but for this price, you’re not going to find anything close to matching this quality and amount of features you’re getting from Alesis Strike Pro SE.

On top of that, the module is top of the line, and we all know that a good module is half the e-drum kit, as it brings you the all-important sound quality.

All in all, this is a great buy for anyone looking to get a high-end kit at a pretty reasonable price.