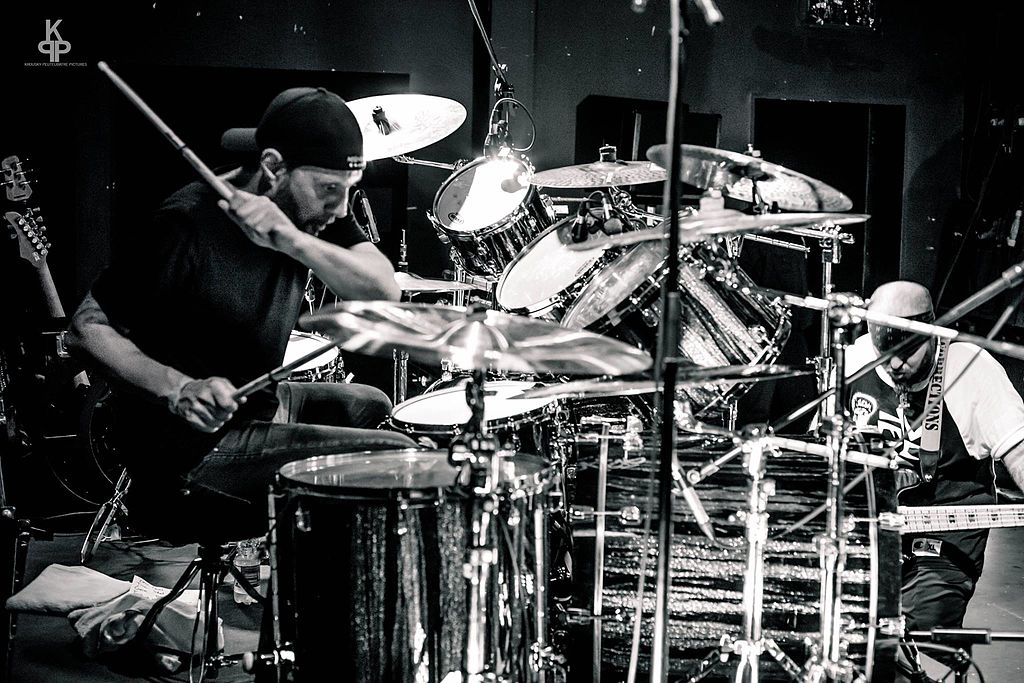 Are you looking for some songs with fantastic double bass drumming? This is the list for you!

The standard of double bass drumming has gotten very high among modern drummers. A whole generation of drummers has focused heavily on improving their speed and technique on the pedals (both with and without using drum triggers, which is a topic we’re not going to get into in this article!).

That said, let’s not forget about the drummers that made them popular, which is why we have included some classic songs that made great use of the double pedals.

The song “Angel of Death” was the opening track of the album Reign in Blood which came out in 1986. The record had a major influence on metal music.

This is an iconic song with singer Tom Araya screaming during the intro.

Dave Lombardo’s drumming took this album to another level. Lombardo is one of the fathers of double bass drumming in metal music. His skill and energy level have always been appreciated by his audience.

This song is the eighth track from Trivium’s album The Sin and The Sentence, released in 2017.

“Sever the Hand” definitely grows on you and is one of the top favorites because of the applauded double bass drumming by Alex Bent, who is why he is widely considered as one of the best drummers in the business.

The fills and cymbal accents in the track outshine his skills. The deathly grooves are a great base. His fluency with the drums is amazing. Beginners can surely take inspiration from this playthrough.

The album Overkill was released in 1979 by the iconic band Motorhead. Lucas Fox on the drums was great and contributed a lot to this track. His bass drumming is a lot less busy than modern tracks, but he was one of the early pioneers of using the double kick.

The title song of the album, “Overkill,” was Motorhead’s breakthrough in their musical journey. The exceptional energy of the song is partly due to the amazing double-kick drumming of Lucas Fox.

This old record still leaves a mark on the audience as well as aspiring drummers.

This one is not as famous as the previous ones we’ve mentioned, but you can clearly see that the drummer Chris Turner has some amazing abilities.

The drumming in this song is fast and intricate. The amount of control and speed required to execute these rhythms should not be underestimated!

It’s the closing track of the album … And Justice for All, released by the band Metallica in 1988. The song is a favorite by many Metallica fans.

The lyrics and tone of the song were influenced by trauma experienced in James Hetfield’s upbringing. It’s a fast song, bursting with energy.

Despite what haters might say, we can safely say that this song included a very solid performance from drummer Lars Ulrich. The speed of the double bass was very impressive, particularly as this was not as commonplace in the 80s.

Unfortunately, Lars now simplifies the drumming of this song when playing it live, so we don’t get the fast, constant double bass hits that the song became known for.

“Disasterpiece” is the third track from Slipknot’s second studio album, entitled Iowa, which was released in 2001.

It is actually a compilation of the most popular tracks created by Slipknot, including “Disasterpiece.” The song covers the subject of bullying and how the victim is voicing his thoughts.

This song is often referred to as one of Joey Jordison’s best throughout the many songs released during his time at Slipknot.

His presence is strong, with lots of energy on the stage as well as with his double bass drums working non-stop and ferociously.

Want to get an electronic drum set that works great with double kick pedals? Check out our guide on Double Bass Electronic Drum Sets

Released in 2003, the second album by the band As I Lay Dying had some great tracks, and “94 Hours” was one of the best among the lot. Jordan Mancino has some heavy use of the double bass in this one, and it’s definitely worth a listen!

8. Miss May I – Forgive and Forget (Jerod Boyd)

Apologies Are for the Weak by the band Miss May was released in 2009 and become very popular. “Forgive and Forget” was the last track on the album.

Jerod Boyd is a skilled metal drummer. This track has some sure-footed double bass drum work, as well as some great-sounding blast-beats. The drums will give you an adrenaline rush that will certainly make you want to rock out!

If you’re looking for some highly technical double bass drum playing, then Mike Portnoy is certainly one to listen to.

“The Dark Eternal Night” is a heavy prog song by the band Dream Theater. It is the fourth track on their ninth studio album, Systematic Chaos, which was released in 2007. The song is a combination of groovy and brutal riffs blending with jazzy keyboards.

Mike Portnoy on drums delivers complex and impressive rhythms that are still great on the ear. This is something we have certainly come to expect from him!

This lengthy track is made up of epic riffs, soulful vocals, and fantastic drumming!

A classic track released in 1983 by Mötley Crüe, the double bass song named “Red Hot” is an amazing classic song.

The album that had this number is entitled Shout at the Devil, which hit the shelves in 1983. This record was certified quadruple platinum in the United States and helped the band gain their breakthrough success.

The song contained some impressive drumming by Thomas Lee, who is popular for his double bass drums. Lee worked with equal energy and passion on his drums that blended well with the rest of the band.

If you want to rock out to some great songs with double kicks, or you want to get some inspiration when drumming with your own double bass drum pedals, then we hope that this can become your go-to list.