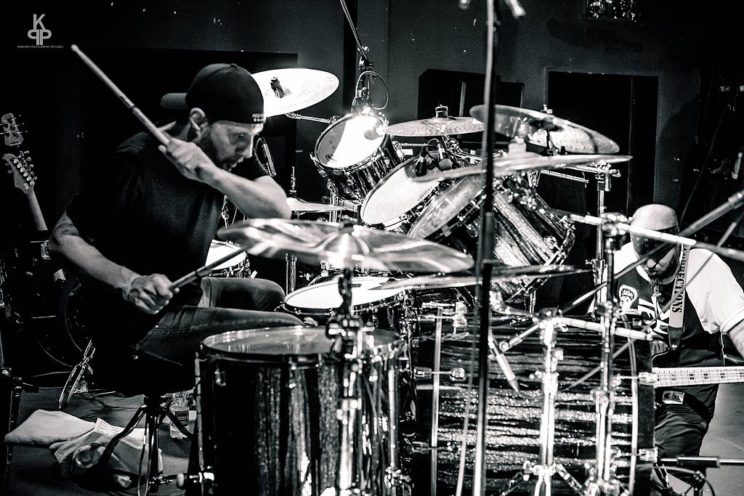 When you think of metal music, the first thing that instantly pops in your mind is that double-bass fast tempo on drums, sounding almost manic. And we should all thank Dave Lombardo for perfecting and spreading that signature metal sound through the years.

Lombardo, most famous for his work with Slayer, is one of the most influential and highly praised drummers in the world. The story of Dave Lombardo is in the same time also story of creation and rise of metal music, which is by itself enough to earn him a place among the stars.

Dave Lombardo was born in 1965 In Havana, Cuba. His father moved the family to California, the USA in 1967, so even though he is of Cuban descent, he grew up in the USA. He started playing drums as a child, showing talent and persistence, so his parents have bought him a drum set that he could play on.

He was influenced most with John Bonham of Led Zeppelin as a kid, and that really showed with his playing style later on in life, as Bonham was most famous for his bass pedal kicking (although he was notorious for playing so fast that every other drummer in the world would think he was using double bass pedal while he was playing with only one foot) and great strength and speed of play, which influenced many metal drummers.

Lombardo’s first taste of music came, surprisingly, by working as a DJ in disco music, but he soon dropped that because of his parents threatened to send him to military school. After finishing high school he got a job as a delivery boy, and through that was introduced to Kerry King, with whom he formed a band which they named Slayer. And the rest is history.

Slayer, together with Metallica, Anthrax, and Megadeath formed the notorious “Big Four” or “The Four Horsemen” of metal music and are holding that title since the ’80s and rise of metal music throughout the world. Dave Lombardo was a huge part of that.

His influence over the band’s musical style, as well as his influence on the other bands, helped shape the unique sound for which the Slayer has been known throughout the years.

Lombardo left and rejoined the Slayer several times since the band formation in 1981. When they first started, he was unhappy with the money they were making from concerts and records, leaving the band in 1986, right after they put out their first widely known album Reign in Blood but he soon rejoined the band in 1987.

The second time he left in 1992 when the band scheduled a concert on the day his first child was going to be born. He was adamant that he will be there for his kid birth together with his wife and was eventually kicked out of the band. He rejoined the band again in 2001, and played with them for several years, but on a more loose basis.

In the meantime, Lombardo had several other bands in which he played, most famous of which are Grip Inc, Fantomas, and Dead Cross. In later decades did most of his work together with Mike Patton, singer of Faith No More, throughout several bands and acts in which they cooperated.

Lombardo always had a unique and specific playing style, easily separating him from other drummers, especially in metal. He is widely praised and considered one of the best drummers in the world, with his unmatched speed and precision while playing. Also, he is widely dubbed “the godfather of double-bass”. And if you ever hear any of the songs he recorded with Slayer or any other band you will quickly notice why.

For his double-bass playing, he doesn’t simply use the double bass pedal as most of the drummers do, but instead he uses two double bass drums separately. He insists that it’s just a matter of style, as he doesn’t like the sound of two bass pedals hitting in the same drum, because of the resonance that is created. You can’t really argue with him that the sounds he is creating are unmatched for their clean sound.

Lombardo is also known for his speed of playing, praised especially for his precision. His start in rock’n’roll and Latin music gave him a much wider sound base, which he installed in his playing as a metal drummer. For instance, he brought the 2/4 polka drumming pattern in metal music – maybe the most notorious trash metal sound you know as the skank. By using such drumming patterns and rhythms with the change of the tempo (speeding them up, to be honest) he widened what was considered metal sound, showing to anyone that you can successfully merge other sounds with metal music. That went so far that he had a collaboration with an Italian classical musician on seven of the Vivaldi compositions.

He is also very famous for the fact that unlike most of the drummers, and especially metal drummers, he doesn’t use clicks or any other help while recording. He has a natural tempo meter in his head and plays solely together with his bandmates, thus creating that specific live sound on his drums and bringing that energy on the track. Because all of the other drummers use clicks and stuff like that to help them record, their records can sometimes sound like they were done on the computer artificially, but Lombardo’s sound is always in tune with the rest of the band, giving them that specific natural sound he is known for.

Like all of the great drummers, Lombardo is endorsed throughout most of his career, and because of that plays on the set of TAMA drums, Paiste Cymbals, Evans Drumheads and uses Promark drumsticks. Earlier we mentioned that he is known for playing double bass drums. Well, he is one of those drummers who like to surround themselves with a huge number of drums so he essentially has two full drum sets around himself, as well as loads of cymbals or other drumming add-ons, which help him achieve that specific sound he makes, especially in his recordings.

Dave Lombardo is one of the greats of music and not just metal but drumming as a whole. His stunning speed and precision brought to the world a whole new sound that was unheard before him and that is a huge accomplishment by itself. He is one of the pioneers of metal music, and with his colleagues did most of the work that saw metal emerge in the early ’80s and become a true world-acclaimed genre and see that the Big 4 bands become some of the world’s greatest bands of all times, loved and listened all across the world.

He didn’t invent anything by himself, but he nevertheless influenced so many younger drummers, and with his creativity used existing stuff to patch it all together and create new sounds that took the world by storm. Also, he’s renowned for his speed of playing and the overall precision together with that speed is what makes him truly remarkable in that field.

Dave Lombardo will forever be remembered as one of the greatest drummers in the world and he truly and honestly deserves that. With his work done throughout his 40-year career, he influenced and raised so many young musicians and truly became an icon of an era, which will never fade or be forgotten.

2 thoughts on “The legendary Dave Lombardo”