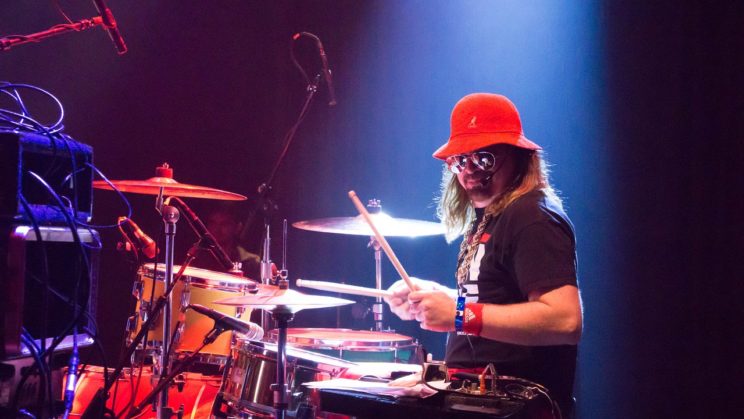 Ever wonder what the name for that classic joke drum sound is? It’s called “The Sting”!

It’s a drum fill that’s commonly used at the end of a bad joke. Here you have it!

How to Play The Sting

If you play drums then you won’t need much tuition on how to play it!

‘The Sting’ on drums is commonly just played with 2 notes on the snare and 1 on the crash cymbal.

Alternatively, the second note can sometimes be played on the floor tom, and the crash cymbal is sometimes choked.

Facial expressions – you can either stay completely deadpan or add a big cheeky smile along with an eye wink. Up to you. It’s not something that should be prescribed, use it based on the situation.

The Wikipedia page for the Sting even includes the sheet music notation for this, if you’re so inclined to check that out!

It is not called a ‘Rimshot’

This is a classic misnomer. A rimshot is a very common technique where the drummer strikes both the drum head and the rim at the same time.

This produces a much louder sound, and it’s great to use for accented notes.

Sometimes a rimshot while playing the Sting, but that doesn’t mean the whole thing is called a rimshot!

As for where ‘The Sting’ originated… we’re not actually sure, we couldn’t find any information on it.

Where is it used?

It’s commonly used in circus acts and cabaret shows, but it’s used in pop culture as much as the Trombone ‘womp womp womp’ sad sound effect.

So that’s it, the joke drum sound is called ‘The String’.

We’ve all learned something new today!