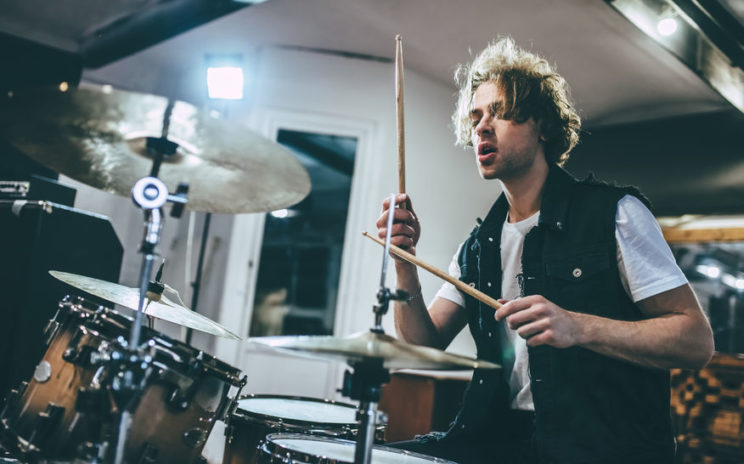 Learning to play new songs is a great way to stretch your skills as a drummer and have fun. When you’re starting out, it’s great to pick songs that are not just easy but also sound great.

You should strike a good balance between playing easy songs at the start, but also stretching your abilities a little. Playing songs you enjoy is a great way to maintain your motivation.

Learn to walk before you run
When choosing beginner songs to play, make sure they have a relatively slow tempo and contain simple beats and fills. Master the basics of drumming first so that you can build a good foundation for advanced beats later.

Songs that are easy to play do not make them inferior. Often when it comes to drumming, less is more. As a drummer, you should be working with other band members to get the best out of your songs.

Sometimes that means sitting back a bit. Therefore, you don’t need amazing drum chops to come out with a solid and tasteful performance.

Here’s our revised list of ten great songs for beginners that won’t be too demanding for a new drummer and will also keep you motivated.

Meg White, the drummer of The White Stripes, sometimes got a bad rep over her simplistic drumming. The drum track on the song Seven Nation Army is extremely basic. However, more intricate drumming might have ruined the song.

Considering that most of The White Stripes’ songs include very basic drumming, there is no better recommendation than the band’s most famous tune – “Seven Nation Army.” A super-simple beat combined with the famous underlying riff makes it pretty much a perfect drum beginner song.

2. Queen – Another One Bites the Dust

“Another one Bites the Dust” is an amazing song in so many ways. It is one of the grooviest rock songs of all time, and the best thing about it is that everything is so simple. It’s not just about that stupendous bass riff, which is at the same time very simple, but the drumming is also very easy to play.

Practically, the same beat is repeated throughout the whole song, with just a couple of extremely easy fills in certain parts. It can’t get much easier than this one.

3. Metallica – Nothing Else Matters

Metallica is one of the first bands that comes to mind when someone mentions metal music. However, metal drumming is usually characterized as fast, aggressive, and quite complex beats.

Despite that, quite a few of Metallica’s songs are relatively easy to play on drums, particularly when the band started slowing down their music (songs from The Black Album, Load, Reload, etc.). Lars Ulrich inspired a generation of metal drummers, and there are plenty of these that have surpassed his skills and technique (particularly his double bass drumming).

As a beginner, you should try to follow the drumming from the album version of Metallica tracks. Lars Ulrich often improvises a lot with fills while playing live.

“Nothing Else Matters” is a great song to start with. As a ballad, this song goes in a pretty steady tempo, but even the beat is pretty simple. The simple fills also make this song great for beginners. There are a couple of them that are very easy to learn, and the best thing is that they sound amazing, so you can use them in many other songs as well.

“For Whom the Bell Tolls” is also a relatively easy song to play on drums; it’s also a pretty epic song.

With all that said, many Metallica tracks are out of reach for beginners, mostly due to the tempo or their use of double kick (two bass drums). For example: “Battery,” “Dyer’s Eve,” “One.”

We can talk about Ringo Starr in this way or another, but there is no doubt that he had a lot of influence in the world of drumming.

His drumming chops were never spectacular, but there are some songs, like “Back to USSR” or “Rain,” where you can see a lot of interesting concepts, but there are also numerous Beatles songs that are super easy when it comes to drumming.

“Let It Be” is definitely one of them. The steady tempo and extremely easy beat and fills make it perfect for beginners.

The band’s most famous song was released in 1986, and it is a typical glam rock song with a nice pop/rock vibe and all other ingredients that are typical for this era and music genre.

It has a powerful but uncomplicated drum line, which puts it in the group of good songs to drum to.

Tico Torres played the drums on this recording and added a fine pop-rock drumming touch to an outstanding tune. Still, it is a little bit trickier than the previous tunes.

The intro and verses flow smoothly, and things are quite simple here, as you need just drum bass, hi-hat, and snare to play it, with a couple of fills in addition.

In the chorus and middle section, you may find a couple of beats that could sound complicated, but even this section is quite simple, as the base rhythm remains the same, and a couple of nice cymbal kicks is everything you will have to add.

This is one of the band’s most famous songs, and like pretty much all tunes from the Australian rockers, it is very simple and easy to play, no matter if you’re playing guitar, bass, or drum.

AC/DC drummer Phil Rudd delivered an iconic yet simple drum pattern with strong beats and clear fills. His playing is rather very basic, characterized by beats that are mostly about bass drum and snare combinations, with simple fills. Still, the song sounds amazing and will keep you playing for a long time.

Nevermind was the album that introduced grunge to the mainstream, and “Come as You Are” has ever since been one of the favorite songs of rookie guitarists because of its catchy guitar riff.

That famous riff will keep your interest in the song for a pretty long time, as well as the fact that the drumming is very basic. Like in most Nirvana songs, Dave Grohl didn’t complicate things at all. Moreover, everything seems pretty clear, even for beginners.

Basically, there are two main sections. Verses mostly rely on a typical combination of a bass drum, snare, and ride cymbal. The chorus is a little bit complicated, as it includes tom-toms as well. Still, even this transition is very easy to catch.

Larry Mullen is a well-known drummer who puts a lot of energy into his playing. U2 songs often sound more complex than they actually are. “Bullet the Blue Sky” is a perfect example.

This particular tune features very simple beats. Although it may sound too fast or complex to some, it is actually quite easy.

If you like U2, then this is a great one to start playing. At the current count, they have 14 studio albums released, so there are plenty of songs for you to get learning!

Muse have many complex songs to play on drums. If you check out videos of their live shows, you will see some impressive playing from Dominic Howard.

However, their song “Starlight” is a relatively easy one to play. They released this song on the Black Holes and Revelations album, which was quite a change-up in style from their previous works.

You just need to learn a few simple beats and fills in order to play this song.

Coldplay are a highly popular British band that have slowly evolved their sound through their discography. The song “Yellow” is a perfect one for beginner drummers. It’s played at a slow tempo and with an easy beat.

It definitely won’t take too much time for you to learn to play it right!

Essential items to improve your drumming:

If you don’t have any of the below items, then I would highly recommend that you get them, as they can really help to improve your development as a drummer:

A practice pad is a portable and often quite a little item that you can practice your rudiments and sticking on.

It was one of the most important things I’ve ever purchased as a drummer. Highly recommended. Check out our guide on the best practice pads.

Drumming is all about keeping in time. If you’re not drumming along to other tracks, then you should drum along to a metronome for drummers, as this is pretty much the only way you can accurately improve your timing. The great thing is that once you’ve trained yourself for a few weeks or months, your timing will be great even when you’re not using a metronome.

I can’t stress this one highly enough – you need to protect your hearing as a drummer.

If you want to drum with a metronome in your ear, then you can pick up a pair of in-ear monitors for drummers or headphones for drummers. Alternatively, oftentimes just some simple earplugs for drummers are a great solution to prevent hearing damage.

A good set of drumsticks

Drum sets often come with junk quality drumsticks. A quality pair should be well-balanced and matched. The weight and style of the stick should also be appropriate to your preferences. Check out our article on how to choose a drumstick for more information.

A proper drum throne will help you drum in a much more ergonomic manner, helping you protect your joints and muscles from injury. Lower back injuries are unfortunately quite common for drummers. Long-term drumming with bad posture can lead to some chronic issues in this area; make sure that doesn’t happen to you.

Conclusion and other suggestions:

The songs in this article are great for beginners starting out on their drumming journey. You’ve most probably heard them many times, which means that you’re familiar with them. This makes them easier for you to drum along with.

When you’re beginning to play drums, it’s great to play songs that match your musical preference, as well as mixing it up with some other styles.

So, combine the songs we’ve suggested with the ones you like most, and you’ll have a great initiation into the world of drumming.

When playing your first few songs, make sure they meet the following:

Also, if you don’t own an electronic drum set, you should consider getting one so that you can easily and quietly practice songs like these. We also have guides on electronic drums for kids and kids drum sets.

What do you think? Do you have any other suggestions for good beginner drum songs?

6 thoughts on “10 Easy Drum Songs for Beginners (With Videos)”