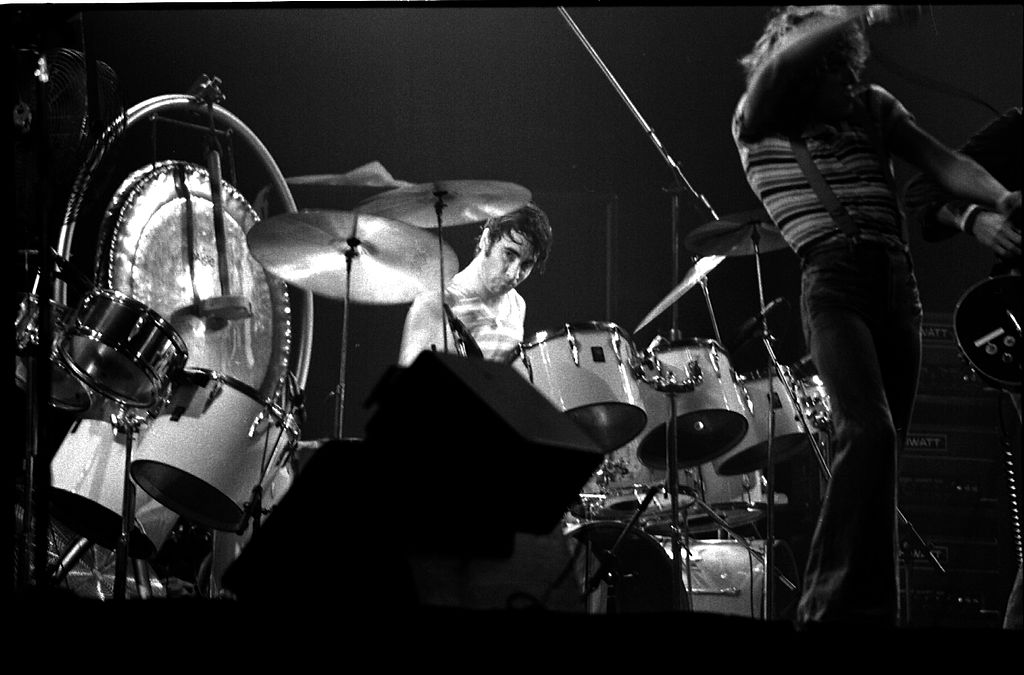 There was one distinctive and energizing element in the music of British rock band The Who we cannot get back: Keith Moon’s drumming.

A genius drummer, unfortunately so prone to self-destructive behaviors and addiction, Keith Moon was one of the greatest musicians of his generation. He blended energy, innovation, and an authentic rock’n’roll vibe in a way nobody had ever heard before.

Through a life of ups and downs, successes and excesses, the British drummer became a true legend, especially after his premature death at only 32.

His strong legacy keeps inspiring drummers and musicians all over the world, including Zak Starkey, Ringo Starr‘s son, who took his place in the band.

Let’s dive into a small account of the legend’s life, story, and drumming.

His Rise to Fame

A true Londoner, Keith Moon was brought up by a working-class family in Wembley, where he spent his childhood distinguishing himself as a brisk kid, quite hyperactive and with a rebel attitude, but also curious and prone to (often dangerous) experiments.

Music seemed to be one of his favorite activities since a very young age so he started studying some drumming foundation at Macari’s Music Studio as a teenager.

Later on, while working as a radio repairman to pay for his lessons with popular drummer Carlo Little, Moon fell in love with jazz and rock’n’roll, taking inspirations from artists with very different backgrounds, like Gene Krupa and Viv Prince.

One night, he was attending a gig of the band he would later join. During a break, he took the courage to talk to Roger Daltrey and Pete Townshend stating he could do better than the session drummer they were employing.

Now, as it often happens in rock’n’roll stories, Keith Moon was given just one shot to prove his statement and impress the band. As a result, he went on stage to play one song, smashing the whole kit to the ground due to his strength and energy.

While he thought he had blown his chance, at the end of the concert Roger and Pete approached him again and asked him to fill in for their next gigs. The rest, as they say, is history.

The Who was not a very cohesive and peaceful enterprise. The four members all had strong personalities, so arguments and dramas were a day-to-day issue.

Nevertheless, the unprecedented sound, the raw and poetical lyrics, the rock’n’roll energy their songs brought on and off stage made the band one of the most legendary in the history of rock’n’roll.

Despite feeling at times like an outsider, Keith Moon surely influenced the sound of the band’s hits through his unorthodox and rich drumming style.

As the band’s popularity increased, Moon started enjoying life on tour the most. Playing live and being on the road, with all the parties and the infinite amount of drinks involved in the process, was what truly appealed to him.

As a result, life off tour started to feel boring and pointless for him, a feeling that contributed to his development of alcoholism and the organization of excessive parties at home. Life on tour also led him to some experiments with amphetamines and other drugs, soon resulting in another addiction, quite difficult to manage.

At some point, it wasn’t that uncommon to see Keith Moon passing out on stage, for example.

One of his most eccentric behaviors was also his tendency to destroy things, whether on stage (drum kits and other pieces of equipment didn’t last for long in his hands) or in hotel rooms, friends’ houses, and even his own home.

The pulse towards destruction was often the result of alcohol or drug intoxication, but it was sometimes just the attempt at being funny and memorable.

Keith Moon died at 32 in a Mayfair apartment, the same one where Cass Elliot (Mama Cass) had died four years earlier.

He had decided to go sober and had started taking medication to control his alcohol withdrawal symptoms. Unfortunately, one night, he took too many pills and was later found dead.

Keith Moon’s drumming was considered quite eccentric by his bandmates too. There were a few issues, in particular, with Entwistle, who would often complain about his imprecise timing. The band, however, soon came to the conclusion that such a personal and peculiar style could be a great trademark.

Like a few other contemporary drummers, like Ginger Baker, he used a double bass drums set-up, obtaining a denser and stronger sound.

He would highlight tom-toms and cymbal crashes, creating interesting and recognizable drum fills but refusing to play drum solos during concerts (which he considered boring).

Keith Moon also contributed to the composition of different hits by The Who, such as “I Need You”, “Girl’s Eyes”, “The Ox”. He loved singing and would sometimes record or perform background vocals, although his loud and eccentric nature often led him to change words and say jokes rather than focus on the real vocal lines.

From 1965, Keith Moon relied on Premier Drums kits, initially without a hi-hat (he would prefer crash cymbals). In 1967 he started using the legendary Pictures of Lily kit, including double bass drums.

From 1970, Keith included additional elements to his set-up, such as gongs, timpani, and timbales, making his sound and drumming style even richer.

Keith Moon was surely one of the most interesting and talented rock’n’roll drummers around. In the words of Nick Talevski, “he was to the drums what Jimi Hendrix was to the guitar.”

Moon clearly left a mark not just on the sound of the band he was part of, and that was able to continue making music after a short hiatus following his death, but on rock history too.

Sources in addition to the ones linked in this article:
http://www.thewho.net/biography/keithmoon/index.html