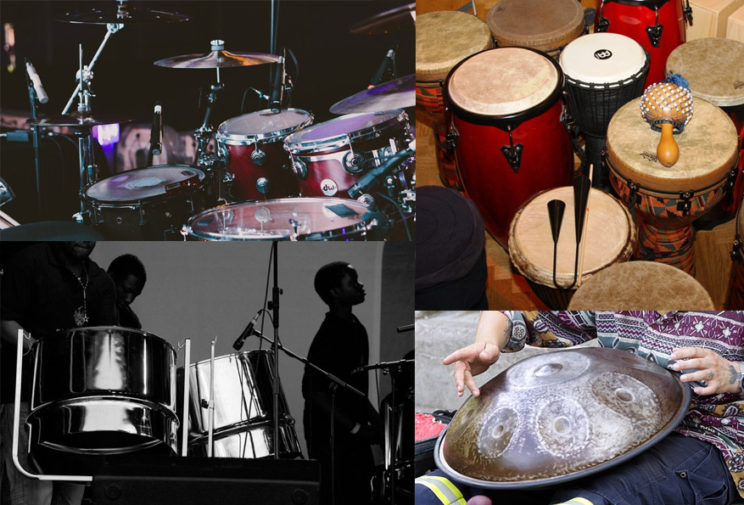 This is your ultimate guide to the different types of drums that you can find all around the world.

This will be useful for anyone that’s curious to learn about all the different types of drums available. It will also be a great guide for musicians that wants to pick up a new percussion instrument, but are not sure which one to go with!

Acoustic drum sets use drum heads and metal cymbals to produce dynamic sounds with a lot of subtlety and variance.

If you want to get the best depth of sound then acoustic drums are usually the best option.

A drum set consists of:

Electronic drum sets are much quieter are often more compact and can be a better option for people to practice, due to noise constraints. Electronic drums also allow you to bring out many different types of sounds from your set.

Hybrid drums are a combination of acoustic and electronic, and they come in many different forms. Drummers usually create their own hybrid drum set themselves based on their needs, such as using drum pads or drum triggers. You can read all about that in our hybrid drums section.

A hybrid drum set can consist of:

Hand drums are very popular in South America, where they are a consistent part of the local folk music.

Congas and bongos, among others, became very well-known worldwide as unmissable protagonists of salsa, merengue, bachata, and Latin jazz.

The name comes from la conga, a drum used in traditional Cuban carnivals.

Congueros can use five basic strokes: the open tone (played with four fingers by the edge of the skin), the tono ahogado (holding the fingers on the skin to muffle the sound), the tono bajo (achieved by striking the full palm), the tono seco, and the toque de punta.

Some other popular Latin hand drums are the tambora (originated in the Dominican Republic) and the plenera, a Puerto Rican frame drum.

Another extremely popular hand drum, now also employed in any pop acoustic setting, is the cajòn, a wooden box originally from Peru, that was quickly extended to flamenco and jazz.

In conclusion, hand drums are a fascinating mix of different styles and cultures. Playing them requires a lot of skill, achievable only through restless practice!

A marching snare drum works in a similar fashion snare use on a drum set, but it is often much deeper and tuned to a much higher level. They also include snare wires on the bottom (resonant) head to give it that cracking sound. Marching drummers often benefit from the use of a special type of drum key to get very high tension on their snare drum.

Interesting note: The Lambeg drum is a very large type of bass drum, that is used by unionists in Northern Ireland. It is an exceptionally loud acoustic instrument, and the drummer usually needs to wear a neck harness, because these drums are just so heavy (up to 40 pounds or 18 kg)! The drums are hit with a material similar to bamboo.

Multi tenor drums are drums of different pitches and sizes, all held on one unit. The marching drummer can then roll back and forth between these using mallets or drumsticks

Djembes fall under the category of goblet drums, so called for the shape of their body, on which a membrane is mounted.

Goblet drums are popular in Africa, Asia, and Eastern Europe.

The African djembes are possibly the most well-known goblet drum in the Western world.

A djembe usually has a body made of hard and dense wood, while the membrane is usually goatskin, mounted on the body through a rope and two steel rings.

Considering its small size, a djembe can emit a very loud sound, up to 105 dB. It also offers a big variety of sounds, making it a great instrument for solo interludes over an ensemble.

The three main sounds used by players are the bass (low pitch), the tone (medium pitch), and the slap (high pitch), resulting from different striking techniques in different areas of the membrane.

For example, to play the bass sound you’ll have to hit the drum with the palm of your hand, towards the center of the skin. To play either the tone or the slap sound, instead, you’ll have to play closer to the edges.

Some other similar but lesser known African drums are the ashiko and the bougarabou.

As highlighted above, the tambourine is possibly the most known frame/hand drum. It is so popular that we can find various versions of it in different genres and cultures, from folk music to rock, from South America to Europe (Italy, Greece, Turkey,…).

Tambourines probably originated in Ancient Egypt and they were also used by the Hebrew people for religious rituals. The term has a French origin (tambour means “drum”, although it seems to originate from the Arabic tunbur or Middle Persian tambur).

The peculiarity of a tambourine lies in the metal chimes (zills) attached to its structure (usually made of wood or plastic), which give the instrument a bright, jolly sound.

We all must have played the tambourine at some point in our childhood, but mastering a performance with this seemingly easy instrument is trickier than it sounds. The hand techniques you could employ are various, and you could even use your legs, hips, or a stick to produce sounds of different intensities and characteristics by stroking the frame. Or you could not stroke the frame at all and go for a tambourine roll, rapidly rotating your wrist while holding the instrument in your hand.

In our times, tambourines are extremely popular in rock and pop music and are often played by the lead singer of a band (think about Mick Jagger or Robert Plant) or the drummer, who can have them mounted along with their cymbals.

Frame drums are very common in Middle Eastern music too. Many traditional instruments from the Middle East and North Africa are actually frame drums you can play with bare hands.

Examples include the tar, the daf, or the ghaval. All these three have similar structures, made of a wooden frame with skin on top of it. These instruments can be played with the palm of your hand, with your fingers, or with sticks and hammers, according to the intensity of sound you want to achieve.

A very similar kind of instrument is the Irish bodhran, which has a comparable structure, but which is usually played with a traditional stick (cipìn).

With this kind of drum, the differences in sound and pitches are mostly attributed to their materials. Their modern versions often have tuners.

The ocean drum is a really interesting type of frame drum, that has beads inside that was made to mimic the sound of the ocean.

The talking drum is a special type of drum that originated in Africa. It is shaped like an hourglass and the pitch can be changed by the player while they are playing the drum.

It has drum heads on either side and these are connected by chords that the player can squeeze between their body and their arm. They are made to sound like the sound of a human humming.

These are a group of melodic percussion instruments that are rich in tone and expression.

The ‘Hang‘ is a very interesting and specific instrument introduced by the Swiss company PANArt in the year 2000 (The company didn’t like it being called a ‘Hang Drum’, and in fact, probably would rather it not be included in this article at all!). Many other producers of similar instruments emerged – these instruments are more specifically referred to as handpans (though casual observers can often refer to all these types of instruments as ‘Hang Drums’).

These are usually handmade and tend to cost in the region of a few thousand dollars. Check out our article on handpans to learn more. Be sure to stay clear of scam artists selling junk metal for 1000s of dollars that have taken advantage of the high-value expectation of handpans!

Another group of instruments known as Steel Tongue Drums have also emerged. They are often smaller and cheaper than handpans, though they are based on a similar tone layout. Some even include built-in piezo microphones and tuning magnets.

All of these instruments are usually made in a single scale (apart from certain models which have a limited amount of tuning possibilities through magents). The benefit of this is that you can hit anywhere and you won’t be out of key. The drawback is that you’re limiting your sound possibilities to a specific key.

The steelpan (also known as a steel drum) is an exotic drum instrument that originated in the Caribbean, you can get some great vibes from these and they are versatile enough to play full melodies.

The steelpan is one of the most recognizable drums and has become a characteristic sound of the Caribbean.

Steel drums have featured in many famous songs and tracks over the years, while often being sampled and used in lots of different music styles.

The timpani is a kettle drum that is used very regularly in orchestral music. These drums are very heavy and they have a drum head, which is tuned using a pedal.

A timpani player is called a timpanist. This is a very skilled and difficult job to have in an orchestra. In fact, timpanists tend to get paid higher than many of the other musicians of an orchestra.

Therefore, the next time you see a timpanist playing in an orchestra. They’re not just banging on the drum, the tuning method and style of play requires a lot of experience, and quite simply put, a lot of guts, to perform live on stage. So check out our article on the timpani for more information about this great instrument.

Drums are among the oldest musical instruments known to humanity, they originated in many different cultures, and they formed an important role in early tribal groups.

The diversity of drums that we have seen in this article shows just how prevalent drumming has been throughout the world.

The style of drums is often a clue into the culture and the style of music that it was played with.

Many simple-looking drums can be deceivingly difficult to play well. The fact that you can play hand drums with bare hands could mislead you into thinking that they are fairly “easy” instruments. They are not!

First of all, there are many different kinds of hand drums, each of them with specific characteristics and sounds. Secondly, hand drums can be played with different techniques, often involving the use of sticks or hammers too.